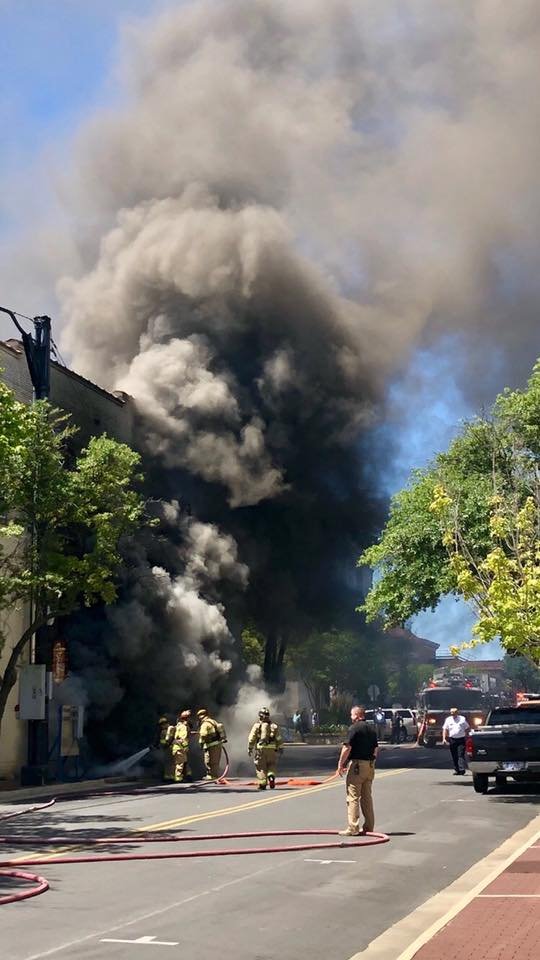 An underground transformer exploded Thursday in downtown El Dorado, knocking out power to several downtown businesses and the Union County Courthouse and forcing them to close for much of the day.

Few vehicles and people could be seen downtown late Thursday afternoon as workers from Energy tended to the problem which originated underneath the sidewalk on the north side of the building that houses Marilynn’s on the Square and upper-floor living quarters.

The transformer blew just after lunchtime began, sending thick clouds of black smoke billowing through the air and drawing crowds of onlookers, some of whom said they were in the middle of lunch in downtown restaurants when the incident occurred.

No injuries were reported.

Emergency responders from the El Dorado police and fire departments and the Union County Sheriff’s Office raced to the scene. Crews from the city’s Department of Public Works and El Dorado Water Utilities were also on the scene.

Officers with the El Dorado Police Department rerouted an early rush of heavy traffic that resulted from the evacuation of downtown businesses and offices that were in the immediate vicinity including the Union County Courthouse.

EPD Fire Marshal Jason Evans and Lt. Chris Lutman, said a transformer blew in a vault underneath an electrical panel on the south side of Elm between Jefferson and Hill.

The electrical panel was one of several that were installed during a downtown sidewalk improvement project that began in 2013 and is being completed in phases funding allows.

The panels were installed to boost utility capabilities to accommodate outdoor festivals and events in the Union Square District.

Damaged sidewalks were also replaced with concrete pavers, new street lamps were installed and new trees planted as part of the improvement.

Just before 1 p.m. Thursday, Evans said the fire had largely been extinguished and firefighters were cooling the underground vault and transformer with foam and a steady blast of water to allow Energy workers in to shut down the hardware that controls the flow of electricity.

Fire and smoke left a blackened streak on the north side of the building, which is historically known as the Wilson building and is listed on the National Register of Historic Places as part of the El Dorado Commercial Historic District.

The building is not individually listed on the NRHP.

Corinne Management, owned and operated by El Dorado downtown developers Richard and Vertis Mason, is the owner of the building.

Richard Mason arrived on the scene shortly after the fire began and while stopped at Elm-Hill intersection, which was blocked to traffic, Mason asked an EPD officer for clearance, saying that he was the owner of the building.

Chris Wasson, customer service manager for Entergy, said power was restored to 109 customers at 4 p.m. He said he did not know if all of the customers who were affected by the outage were businesses.

There were reports of lights flickering and what sounded like a power surge in buildings from as far as two blocks away.

By 4:30 p.m., only Elm between Hill and Jefferson remained closed to traffic as Energy crews continued working on the scene.

“With the damage that’s done, it’ll probably be the end of next week before we determine the cause. There’s a lot of flooding there from the water hoses and we’ve got to get environmental groups to get in there and pump it out and get it cleaned before we can look into it,” Wasson said.

He said environmental crews are expected to begin work today.

Downtown businesses and the Union County Courthouse are expected to reopen today.