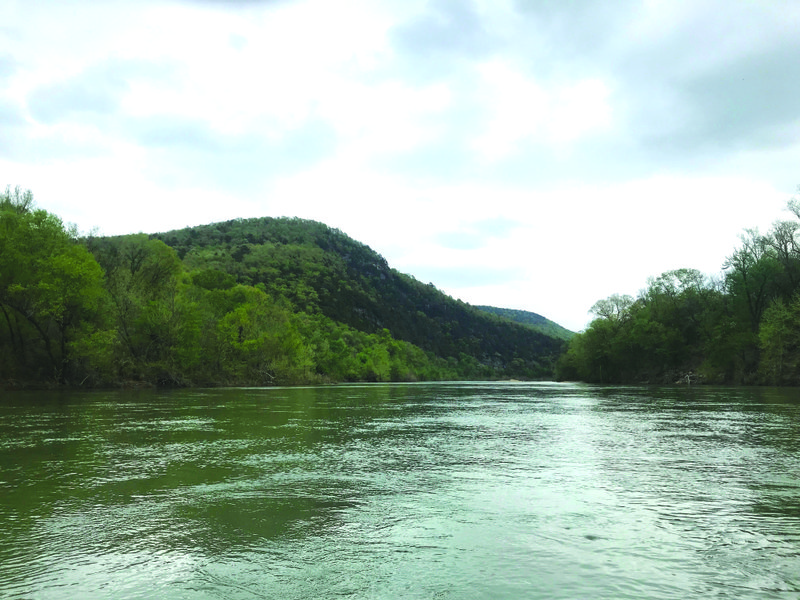 The Buffalo River in Arkansas.

For Jaren Books, it started out as a conversation with his longtime friend Justin Mitchum.

Justin wanted to spend a couple days floating down the Buffalo River, the 135-mile national river that flows unhindered through the Ozark Mountains. And even though Jaren had never done anything like it before, he was game to try.

“We did it over Memorial Day weekend in 2018,” Jaren, who works as the membership and events coordinator for the El Dorado-Union County Chamber of Commerce, explained, adding the two friends had a great time. “After we did it, Justin told me he wanted to float the whole thing.”

It was a tall task, especially for two beginners, but Justin and Jaren threw themselves into research and preparation. Justin read several books on the subject and purchased waterproof maps of the river, while Jaren began listening to podcasts like “Backpack Radio” and “Hiking Through.”

They joined Facebook forums and chatted with others who had or were planning to float the Buffalo, getting real time updates on conditions and hazards. Finally, the weekend before Easter this year, they were ready to go.

• The float: Things did not get off to a great start for the two friends. Justin flipped in his kayak twice, and broke a paddle a few miles into the journey. They were able to stop at a nearby ranger station, and Justin’s wife brought him a new paddle.

“The water was cold, and it was pretty cold outside as well,” Jaren said, noting it actually snowed in the area the day before. “I was worried that first night about Justin. I kept waking up every few hours to check on him.”

The next day, around noon, however, the sun came out and the two adventures got back to their journey. They met other kayakers, ate well and enjoyed the river’s beautiful scenery.

“There was a group of guys, probably about five or six of them, that floated by that morning,” Jaren said. “They passed us, then we went past them, then they caught up with us the next day, so we were able to float with them. They were from Texas and Alabama, a bunch of friends. They were doing the same trip.”

Three days into their adventure, they had a choice to make. Rains had swollen the river, and more rain was predicted for later in the week. They’d either need to speed up their journey — make the last 75 miles or so in two days — or call it quits.

The last two days, they paddled 75 miles, using the strong current to propel them forward and staying on the river for most of the day. It was a remarkable accomplishment, and as they prepared to leave, Jaren couldn’t believe what they’d done.

“If you look at a map, the Buffalo stretches across a large portion of Arkansas,” he said. “It was this surreal feeling. We were excited that we had done it, but at the same time it’s hard to believe.”

Jaren and Justin are planning their next trip. In the meantime, Jaren hikes trails in west and northwest Arkansas, often two-day trips of 12-15 miles. Sometimes he goes with friends; a few weekends ago, he just went by himself. The solidarity is refreshing, he said, giving him an opportunity to marvel in the glory of God’s creation.

“You’re disconnected from the digital world,” he said. “It allows you to have that time to really think. Sometimes, you’re just soaking everything in. Being able to see how vast God’s creation is, we’re such a small thing in his greater plan.”

Finishing a solo hike can be mentally taxing, he noted, adding that the final six miles he struggled to keep his mind off of his aching feet and on something productive. But building up that focus, as well as his “hiker’s legs,” is a part of the process.

“You have to focus on ways to not think about walking, because when you focus on walking, you start getting tired,” Jaren said. “It is nice looking back at it and realizing I had the mental fortitude to do that.”

• For the newbies: Jaren said that if you’re thinking about picking up kayaking and/or hiking, don’t over-analyze. You don’t have to spend a fortune on gear, or float the entire Buffalo. Start off small, he said, figure out what your limits are, and just get out there and do it.

“Most people are intimidated by the outdoors,” he said. “We’re used to our creature comforts, and sometimes, in order to get into this, it takes that step of faith that God is going to protect you, and you’ve done all you can do to make sure you have your necessities.”

Jaren and Justin did a short three-day hike before their first Buffalo experience, testing their gear and their planning skills. Jaren said that test was key to their success. But, he noted, no matter how much confidence you gain or experience you have, it’s important to respect the elements.

“I’m confident in my planning abilities, but, at the same time, you can never be too confident with the river,” Jaren said. “The river can become very treacherous very quickly. You never know what’s around the next bend. The river can rise rapidly; it can become unfloatable because of how fast you’re going.

“I’m more comfortable, but I don’t think you could ever truly let your guard down.”