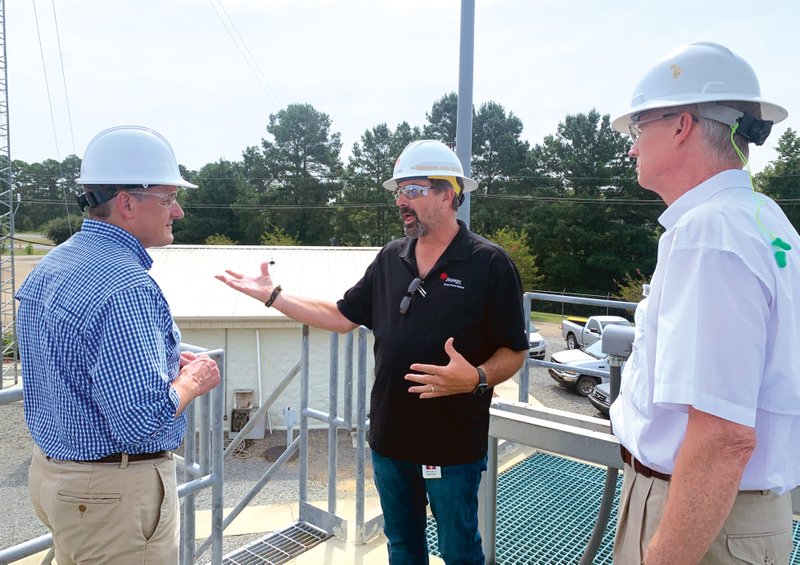 Water treatment: Rep. Bruce Westerman (R-Ark.) on the left tours the Union County Water Conservation Board's water treatment plant Thursday morning. The congressman, who is touring the infrastructure around the Ouachita River, discussed the economic and recreational opportunities made possible by the river. Caleb Slinkard / News-Times

If you talk with Rep. Bruce Westerman (R-Ark.) for even a few minutes, it’s clear he cares about the trees and rivers of Arkansas.

The only forester in Congress, Westerman sits on the House Transportation and Infrastructure Committee and is the ranking member of the House Subcommittee on Water Resources and the Environment. That subcommittee has, among other responsibilities, jurisdiction over civilian Army Corps of Engineers programs, as well as the water quality and infrastructure programs from the EPA.

“Rivers connect communities,” Westerman said Thursday as he toured the Union County Water Conservation Board’s water treatment facility. “My home, my farm is actually on the headwaters of the Ouachita and the Saline rivers. We’re all connected through waterways. I grew up on the Ouachita River, Lake Ouachita, Lake Hamilton.”

Westerman toured the Thatcher Lock and Dam, the Ouachita River intake and the water treatment facility. The facility converts some 20 million gallons of river water a day into water that can be used by local businesses. The plant’s main customer is the nearby Entergy plant, which uses the water for cooling purposes, converting much of it to steam. A station closer to El Dorado helps regulate pressure for the rest of the water, which is used by more industry partners and local organizations, like the El Dorado School District for irrigation.

Plant employees like Joe Upp explained the process, which, after you get past words like polarity and coagulant, is actually fairly straightforward: the water is treated with bleach at the river intake, and a coagulant is added at that point to change the water polarity. Then a polymer is added, and the various heavy particulates in the water bond to sand that’s already in the river, or sand that the plant adds if necessary, and settles to the bottom as the water is pumped through the facility. After going over several gates that collect the sand, the water is almost ready to deliver. The pH levels of the water are adjusted to meet customer needs, and then one huge pipe sends it on its way.

By using the river water, rather than ground water, to meet the extensive needs of local industries, the water treatment plant ensures less water is pulled out of the Sparta Aquifer, which serves as the primary source of drinking water for many cities and communities in Arkansas.

“What El Dorado and Union County has done by using surface water for their industrial processes has allowed the Sparta, which they get their drinking water from, to recharge over 100 feet already,” Westerman said. “A great source of potable drinking water that was being used in industrial processes. This is a really good example of advanced planning, looking to the future.”

Westerman noted that extensive portions of the United States’ navigable waterway infrastructure is old and in need of repair.

“For the subcommittee that I’m the ranking member on, that’s right in line with the work that we do,” he said. “It’s good for me to get out into the field and see things that need to be replaced and gain a first-hand understanding.”

Westerman looked at home discussing various processes and pieces of machinery with water treatment employees (he’s an engineer by trade). His tour of the Ouachita River continued to Camden and Lake Ouachita, as well as the bass fishing tournament FLW Cup on Lake Hamilton.

“These are the days I long for when I’m stuck in the big city and wanting to breath the fresh air,” he said. “This is like therapy for me.”