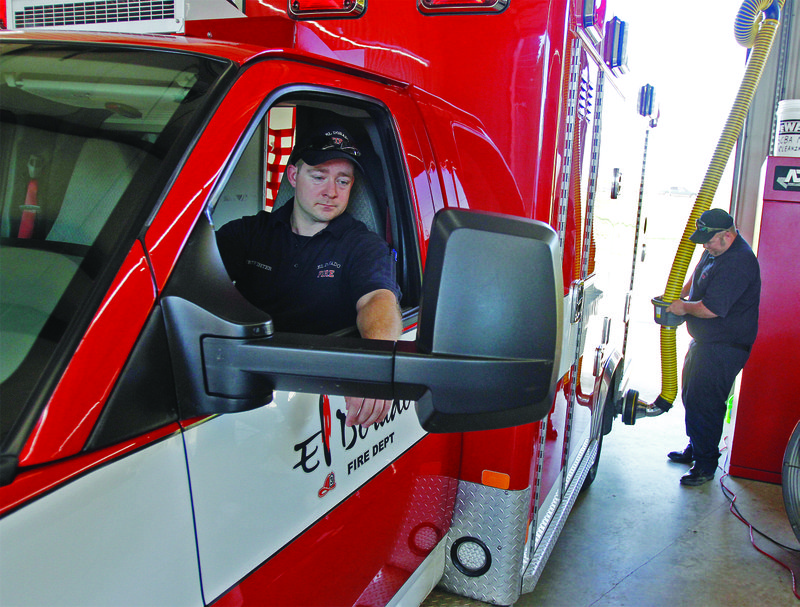 EFD: El Dorado Firefighter Wesley McCulough, left, watches in the driver’s seat of an ambulance as Lt. Justin Green connects the exhaust pipe of the vehicle to the hose of the station’s new diesel exhaust extraction system. The system redirects fumes from the vehicles diesel engine to a safe area outside the fire station. Terrance Armstard/News-Times

Arkansas legislators passed Crump’s Law on Monday, granting municipal firefighters across the state an extra six months of paid sick leave when they are being treated for cancer contracted on the job.

Members of El Dorado Professional Firefighters Local 1704, a labor organization representing 90 percent of the paid firefighters in El Dorado, lobbied at the state Capitol in February for the bill’s passage.

“I think it’s a big step forward for firefighters in the state of Arkansas,” said Seth Rainwater, former 1704 president and current secretary/treasurer for the Arkansas Professional Firefighters Association. “Hopefully, Crump’s Law gives them a little more opportunity to heal and get back to work and continue to serve. … It gives us the opportunity to not only take care of ourselves, but also take care of each other.”

Crump’s Law is named after Nathanial Crump, a Little Rock firefighter who, due to a lack of sick time available, was forced to return to work while still fighting cancer. Crump later died after being transported to the hospital from his fire station.

Although the Professional Firefighters initially pushed for one full year of paid sick leave for those who are diagnosed with occupational cancer, Rainwater said they are happy with the compromise because it protects both firefighters and the municipalities they work in.

“We not only have to take care of each other as firefighters, we also have to watch out for the cities as well, so to make this palatable for both the firefighters and the cities themselves, we think that six months is a very good compromise,” Rainwater said.

El Dorado Fire Chief Chad Mosby said he doesn’t expect the law to change El Dorado Fire Department operations. He said the EFD has anticipated staffing issues that arise from extended leaves from times firefighters have had to take leave in the past, such as an extended sick leave or a leave for military service.

“I don’t see that it would affect us adversely. We already anticipate staffing issues where we have people on extended sick leave, or it’d be the same as absorbing a staff shortage when someone is on military leave, or that kind of thing,” Mosby said.

If multiple people were to require an extended leave, the EFD may have trouble, Mosby said. However, the department takes multiple steps to limit their firefighters’ exposure to carcinogens.

“We have been really, really proactive here locally in trying to stay ahead of the game when it comes to exposure. We try to limit the amount of exposure and we try to make sure that not only do we put these things in place, but we provide and foster a culture to be aware of those things,” Mosby said. “This is an inherently dangerous job … so we move forward trying to protect our men and women here as much as we can.”

The EFD has a washer/extractor at each station. Essentially an industrial washing machine, firefighters can wash their gear after wearing it at the scene of a fire. Mosby said the machine is specifically designed to remove carcinogens from the gear. Firefighters have an extra set of gear to wear when their primary suits are in the wash; there are also enough protective hoods for each firefighter to wash theirs at any time and still have one to wear if they’re called to a fire.

Additionally, when fire trucks are parked at the station, their exhaust pipes are connected to hoses that allow the exhaust to exit the station, instead of getting trapped inside. Mosby said diesel exhaust is a major carcinogen firefighters regularly come in contact with.

Firefighters also use Rescue Wipes, which allow them to clean ash and soot off their skin at the scene of a fire.

“They’re essentially an adult version of a wet wipe, but they’re specifically designed so they can get the ash and soot off their skin as quickly as possible,” Mosby said. “They can do a quick clean on scene, get as much of that off their skin as possible and then go back to the station for a good shower.”

Before Crump’s Law, firefighters were entitled to up to 2,160 hours of paid sick leave, depending on the length of their employment with a department. Since firefighters typically work 24-hour shifts, that amounts to about three months of leave, which Mosby said could often be insufficient.

“If you think about the time it takes to go through cancer treatment, chemo and things like that, sometimes you can exhaust that pretty quick,” Mosby said.

For Crump’s Law to affect a firefighter, they must have been with their department for at least five years; Rainwater said the five year quota is because that is about the least amount of time it could take for someone to be exposed to enough carcinogens on the job to develop occupational cancer.

“It takes time to get those exposures, and also five years is about the time it takes to max out your sick leave,” Rainwater said.

Not every type of cancer is covered under the bill; if a firefighter develops a type of cancer that has not been scientifically linked to their job, they will not qualify for the extended leave.

In addition to Crump’s Law, House bill 1345 also passed, allowing firefighters to take a disability retirement if they are diagnosed with occupational cancer and have been working for their department for long enough.

“Before this passed this legislative session, the Arkansas legislature recognized that firefighters could die from cancer, but they did not recognize that cancer could disable a firefighter,” Rainwater said. “Now, a firefighter, if they’re invested in our retirement system, can get a medical disability if they get cancer and can’t return to work.”

When the Professional Firefighters lobbied at the Capitol in February, they were also supporting HB1614, known as the ‘firefighters’ bill of rights.’ Rainwater said that bill was pulled from the current legislative session in order to make changes to it, but it may be revisited at the next legislative session.

According to the National Fire Protection Association, firefighters receive 9 percent more cancer diagnoses than the general population; they die from cancer at a rate that is 14 percent higher.

“We had a good, kind of a grassroots campaign,” Rainwater said. “We’re very happy with the vote. I think it shows that Arkansas legislators and, of course, the citizens of Arkansas support their first responders and are going to do what it takes to be sure that we’re able to serve our communities.”