Rudy Ruettiger speaks on the importance of developing character 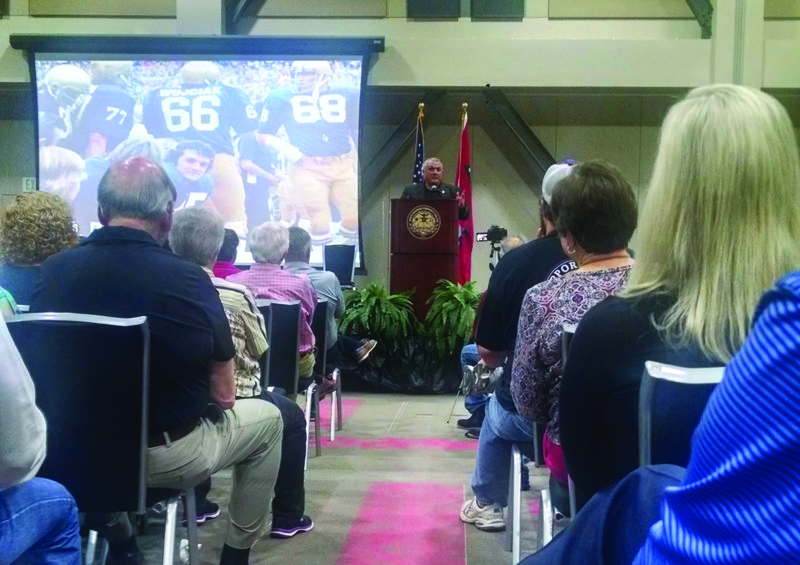 In the last Notre Dame game of the 1975 season – against Georgia Tech – in the last 27 seconds of the game, the Fighting Irish were winning 24 to 3.

In those moments, a decision was made to send senior walk on defensive end Rudy Ruettiger into the game. Ruettiger was given a chance and he ended up sacking the opposing quarterback.

Ruettiger came to South Arkansas Community College on Thursday night as part of the SouthArk Lecture Series to share his story.

“Rudy Ruettiger is the epitome of the underdog,” said Dr. Jim Yates, chair of the Lecture Series Committee. “He’s dealt with adversity and didn’t back down or give up. Instead he faced it head-on to achieve his dream. He’s a solid, down-to-earth speaker who inspires his audience to be better than they see themselves and to pursue what they really desire. SouthArk is very proud to have him as our fall Lecture Series speaker.”

Ruettiger grew up as the third of 14 kids, seven boys and seven girls. Growing up, he said, he didn’t have good grades and hated homework. His punishment for bad grades would be to help with laundry, clean his room or fold underwear.

“I didn’t know that what my dad was teaching me when I got bad grades was character,” Ruettiger said. “I had to shine my brothers’ shoes, fold underwear, get my room in order before church so that when we went to church we’d have clean underwear. Then on Monday we’d fight over the clean underwear, but he still made me do it because it was my discipline.”

He would go to church every Sunday and at the end of the service the pastor would announce the Notre Dame score. Ruettiger said it would be a good week at home if the Fighting Irish won.

And he dreamed of playing for Notre Dame.

When he graduated high school, Ruettiger went straight into the workforce because he was made to feel as though he would never be able to chase his dream because he’d been led to believe he was stupid.

Ruettiger watched as his friends were drafted into the Vietnam War and didn’t return. He decided that he wouldn’t be drafted, but would join the Navy. He grew even more excited when he found out there was no test to join.

“I got excited going to boot camp,” Ruettiger said. “Go to boot camp and the first thing they do is cut your hair so you all look alike. I never had much when I was growing up, but we thought we had a lot because that’s how we were brought up. What you don’t have, you won’t miss. But what you have, if you don’t have gratitude, is no good. I got my first brand new pair of underwear with my name stamped on it (at boot camp). I was so excited. I’m not going to tell the dude next to me why I’m excited because I’m not going to let him steal my joy.”

When Ruettiger returned after the war, he started looking into following his dream. He went to the junior college directly across the street from Notre Dame where he was able to enroll in classes. He was told that if he went to class and got all A’s, he would be able to transfer to Notre Dame after four semesters.

That’s what he did. He also applied to transfer at the end of every semester knowing that he would get rejected. With each rejection, Ruettiger went to Notre Dame and asked what he else he needed for the transfer to be approved. He said this was to make sure the admissions office at Notre Dame knew his name.

After eventually getting in, Ruettiger joined the Notre Dame team as a walk on as soon as he was able to. For his last game of senior year, he was finally given the chance to play.

After that game, he wasn’t sure what his dream was anymore. However, Ruettiger said, he found one. While he was working, he was also looking for a way to tell his story. He searched for people in Hollywood who might be interested in telling the story about a Notre Dame walk on.

The film he pushed for finally came out 25 years ago.

“They made a major motion picture out of a kid who could fold underwear,” Ruettiger said. “They didn’t make a movie because I was a football player. I only played 27 seconds, I don’t know that much about football. But I knew what I wanted to be and to do what I needed to do to be a part of something great.”