Schools work to offer mental health services to students who may be struggling by Caitlan Butler | March 4, 2018 at 5:00 a.m. 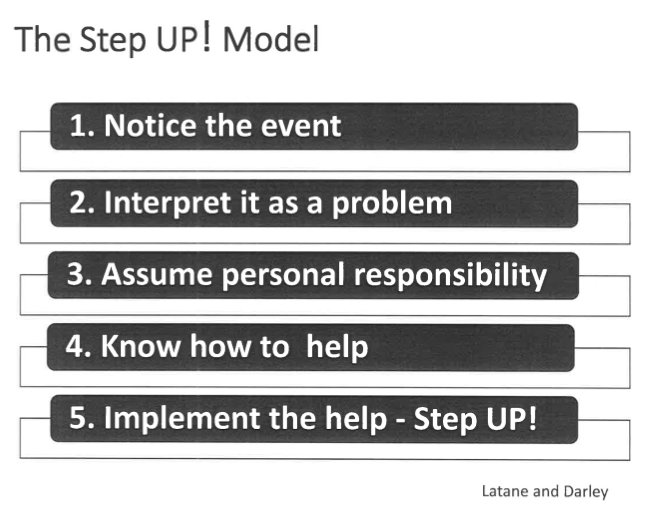 Step up: The Step Up! Bystander Intervention Facilitator Training Program Model encourages students to say something if they see a classmate being bullied.

Editor’s note: This is the second in a two-part series looking at what steps local schools take to be prepared in case of an active shooter. Part one looked at safety measures used by the schools, while part two looks at the services available to students in crisis and how to help someone before they become violent.

After a mass shooting event, the debate inevitably turns to the mental health of the perpetrator and when digging into the backgrounds of people that commit these acts of violence, there is a common theme: they often needed help.

One commonly cited cause for school shootings is bullying on campus. Psychologist and author Dr. Peter Langman said not every shooter was bullied; however, students cite it as the most common reason for a classmate to shoot up a school, according to National Voices for Equality, Education and Enlightenment.

In recent years, states have worked to curb bullying in schools, with 49 states currently having anti-bullying laws on the books. Arkansas has several regulations in its code, including making group conflict resolution programs mandatory in schools, and these types of anti-bullying campaigns are exactly what is used in the El Dorado School District.

At El Dorado High School this year, students were introduced to a program called Step Up!, which is designed to motivate students not to fall prey to the bystander effect, and instead actively intervene when they see someone being bullied. The school has also participated in Rachel’s Challenge, another anti-bullying program started by the parents of Rachel Scott, the first victim at the 1999 Columbine shooting. The school chooses Friends of Rachel delegates to inspire a culture of compassion on campus.

There are also individual interventions for bullies and their victims. Depending on the severity of the bullying, district Superintendent Jim Tucker said school officials will meet with the bully, increasing the severity of consequences if there are subsequent bad reports about the treatment of classmates. The bullied student will be offered counseling if they are interested.

In the ESD, there is at least one guidance counselor available on every campus and the high school has three. They have training in recognizing symptoms of mental illness and if their intervention is insufficient, they can refer students and parents to local facilities, such as South Arkansas Regional Health Center or Day Spring Behavioral Health.

When teachers notice that a student’s behavior is different than it usually would be, they can discreetly notify the guidance counselors. At that point, they will meet with the student to assess their needs, which can include one-on-one conversations to determine what is bothering them and if possible, trying to help a student cope with any personal issues they are facing. If necessary, they will recommend further treatment at one of the aforementioned mental health agencies.

The counselors also will visit classrooms at times. Director of Counseling Kimberly Thomas said teachers will sometimes ask the counselors to observe a class in order to monitor a student’s behavior and interactions with others. They also teach guidance lessons on subjects such as social development, conflict resolution and dealing with mental health problems.

Guidance counselors depend on students and teachers to report concerning behavior. Thomas said that is their main avenue for intervening in a troubled student’s life, adding that students can make a difference in each others’ lives.

“Don’t leave them alone, come with them to the guidance office, or let someone know that you’re concerned about them,” Thomas said. DESIGN-Good pull quote opp.

But bullying isn’t the only thing that can trigger a school shooting. Related, but often overlooked, is social rejection, when someone is deliberately excluded and is unable to form satisfying relationships. Langman said self-isolation like that of Adam Lanza, the Sandy Hook shooter who refused to leave his basement bedroom in the weeks leading up to the massacre, can be a sign of a psychotic break, and that generally, those who would commit a school shooting would not have a strong social group. It is much easier to overlook or ignore that someone is eating alone every day at lunch than overt bullying.

According to the National Center for Biotechnology Information, social isolation makes it harder for adolescents to cope with normal stressors. It is also harder for socially isolated people to reach out for help, and even when they do, they have a harder time maintaining relationships with their support systems. Often, their self worth will suffer as a result of the isolation.

Socially isolated people aren’t necessarily without friends, but they will consider the friendships to be shallow, that despite being nominally friends with someone, the relationship is hollow. Langman said that instead of friends, some isolated people may have “followers.” Adolescents are especially at risk of isolation because they are more sensitive to ambivalent social cues; they find rejection where there isn’t any.

According to a study by the U.S. Department of Education and Secret Service, there is no profile for a school shooter. Instead, one must watch for concerning behaviors.

Most children who commit school shootings will mention their plans to at least one other person, according to the USDE/Secret Service study. While they usually don’t threaten their targets directly, they may show signs that they are considering violence, which can include stockpiling weapons, or showing pronounced interest in them, telling friends to avoid certain areas or a certain day of school, or outright saying that they would like to hurt or kill someone. Violence against animals is considered another warning sign.

According to the American School Counselor Association, schools need to be in tune with students’ lives outside of school. Students facing life-altering events like the death of a loved one, a divorce or other serious personal issues are at a higher risk for mental health problems like sadness or depression, anxiety and anger, according to the American Psychological Association.

But it can be hard to connect with students on that personal level when guidance counselors are stretched thin. The American School Counselor Association recommends each counselor serve no more than 250 students. Thomas said each counselor at El Dorado High School works with about 450 students.

And those numbers are not unusual. In the United States, the average number of students a counselor will serve is 482. Arkansas is on the lower end of that range, with an average of 373 students per counselor, but there are exceptions at larger schools such as El Dorado.

Fostering a culture of kindness and trust in schools is an important step in combating school violence, school social worker Ana Bonilla-Galdamez said in a 2016 interview. Students should feel that they can trust teachers, administrators and other faculty if they or someone they know is having a mental health crisis. Students can also help their classmates by being inclusive and alerting trusted adults if someone they know seems to be acting strangely or exhibiting otherwise unsettling behavior.

Tucker urged people who know someone struggling with mental health issues or a life-altering event, to alert someone they trust, especially a mental health professional if possible. If someone threatens violence, law enforcement should be notified, he said.