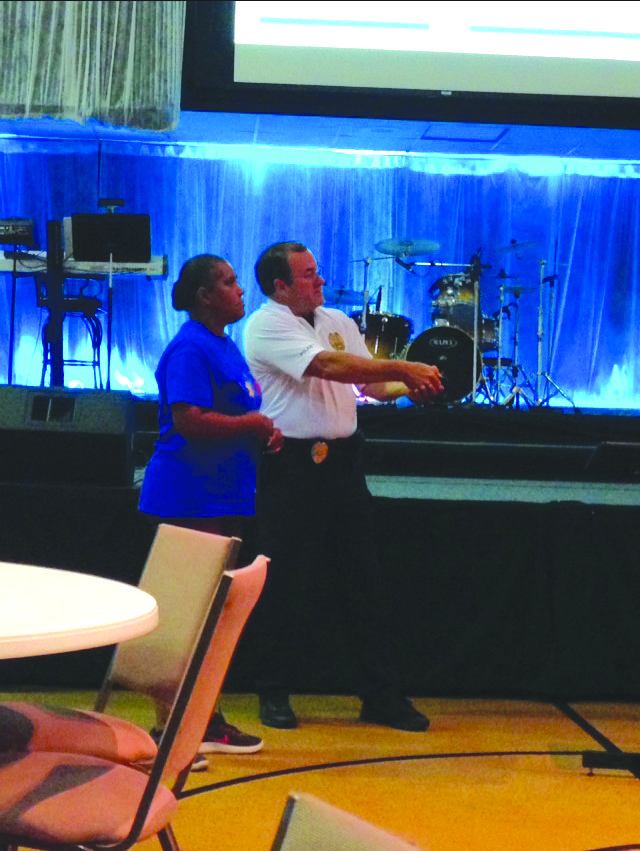 Groans and gasps could be heard around the auditorium Monday when Lt. Scott Lancaster showed footage from the Columbine school shooting during an active shooter response training session held at Immanuel Baptist Church.

Lancaster, a community relations officer with the Batesville and Independence county police departments, is a certified advanced active shooter instructor. At the training session, he walked attendees through the ALICE platform, a nationally recognized training curriculum that teaches a proactive response to active shooting situations. 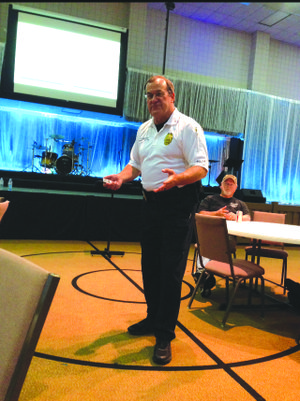 “For years we’ve been taught, in the event of an active shooter, you run, duck hide, wait for the police to get there. And in every situation that’s ever been done in, it’s had casualty rates of 50, 60, 70 percent, because the police simply don’t get there quickly enough, they can’t,” Lancaster said. “ALICE teaches the people that they are the first responders.”

ALICE is an acronym for Alert, Lockdown, Inform, Counter and Evacuate. Lancaster said this is not a linear, progressive response; once one has been alerted to danger, the rest of the training comes into play.

When one recognizes that a violent intruder is present, the first thing they should do is alert their peers to the danger. That can include screaming that there is a shooter, sending a group text message to inform everyone in the building of the situation or making an announcement over an intercom system, among other things. Of course, one should also call 911 as soon as possible.

It is also important to inform those around you of the situation as accurately as possible. One should note the shooter’s location and the direction they are headed in if possible.

“Without information you cannot make an intelligent decision,” Lancaster said. “A willingness to act is also important.”

After the danger is known throughout the building, one will need to use whatever information they have about the situation to inform their decision making process for their next steps. The only options, Lancaster said, are to lockdown, counter or evacuate.

A lockdown is more than simply locking the door to the room one is in. Lancaster said the most important part of locking down a room is barricading the entrances. One should block the door with anything at their disposal. For outwardly opening doors, someone could tie a belt around the hinge mechanism or use a long piece of wood attached to the door handles and braced against the wall to block an intruder’s entrance.

“You’ve got to have an impenetrable fortress with the things that are available to you. If they can’t get in there, they can’t hurt you,” Lancaster said.

If one is within close range of the shooter, they have the option to counter the attack. Countering boils down to fighting back in whatever ways possible. Lancaster said countering should be a person’s last resort and only used when necessary.

In a demonstration, volunteer Stephanie Patton was sent with a laser pointer to the middle of the room, representing an active shooter. Before the session, Lancaster gave several attendees small balls, which he instructed them to use to counter Patton’s “attack.” When she turned on the laser pointer, Lancaster began screaming “Shooter!” while other attendees pelted Patton with the balls.

The counter to Patton’s “attack” was noticeably effective; the laser pointer’s dot swung wildly on the wall. Lancaster said he wanted to demonstrate the ways one can distract and disrupt a shooter’s concentration, even for a few seconds.

Lancaster also described several powerful self-defense tools that could be utilized in a counter to an active shooting event. He said throat punches and eye gouges were two of the most effective defenses, along with hitting male threats in the testicles.

“They put themselves in that position. Who are they to come into your area and make a decision about whether you’re going to go home and see your family at the end of the day?” Lancaster said about countering an attacker. “We’re not having it. They came in the wrong office,” he continued.

Finally, there is the option to evacuate. Lancaster said that if it is possible to evacuate safely, that is what one should do immediately. If one is in lockdown, barricaded in a room, they should take stock of any exits, including windows, and begin trying to escape if they can.

Lancaster showed the Columbine footage to illustrate the results of a passive response versus a proactive response to an active shooter situation. Students have been taught for years that in the case of danger, they should lock the doors and hide. However, at Columbine, of the 36 people who were hurt and killed in the shooting, all were hiding. 1,900 others, including some students that were in the library during the shooting, ran away and were able to escape without injury.

“When I show this video, I do not, by any means, mean to be critical. … They did what they were trained to do. They did what we were all taught to do,” Lancaster said.

The training was sponsored by the TOUCH Coalition (Tremendous Opportunities for Union County Health). Chairwoman Stephanie Owens said that because of an increase in school and workplace violence, it was critical that people know what to do in case the unthinkable happens.

“I think knowledge is power, so it’s going to empower individuals to have the knowledge of what to do when they find themselves in situations that could take their lives,” Owens said.

Libby Blake and Shiree Daniels, two employees of Fact, Inc., who work with Union County school districts, were in attendance. Daniels said she wanted to come in order to apply what she learns to the schools she works in.

“We’re always open to situations that are going to help us take care of our people,” Blake said. “It definitely makes [me] want to go back and get a plan in place.”