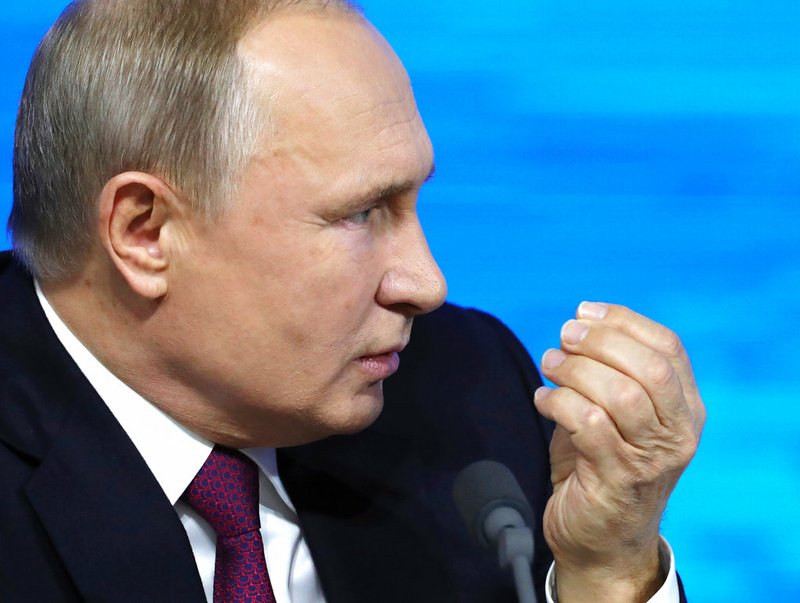 Russian President Vladimir gestures during his annual news conference in Moscow, Russia, Thursday, Dec. 20, 2018. Speaking at news conference Thursday, Putin pointed at the U.S. intention to withdraw from the 1987 Intermediate-Range Nuclear Forces (INF) Treaty. He said that if the U.S. puts intermediate-range missiles in Europe, Russia will be forced to take countermeasures.

MOSCOW — The United States' main ally in Syria on Thursday categorically rejected President Donald Trump's claim that Islamic State group militants have been defeated, saying a premature U.S. pullout would have dangerous repercussions, including a resurgence of the extremists and a destabilizing effect on the entire region.

Trump's surprise decision to withdraw all U.S. forces was welcomed by Russian President Vladimir Putin, who said he agreed with Trump's assessment, adding that U.S. forces should not have been in Syria from the start.

The Kurdish-led Syrian Democratic Forces said in a strongly worded statement laced with bitterness that the fight against IS was at a "decisive" stage that requires even more support from the U.S.-led coalition.

"The war against terrorism has not ended and (the Islamic State group) has not been defeated," the statement said.

Trump's decision to withdraw troops from Syria has rattled Washington's Kurdish allies, who are its most reliable partner in the country and among the most effective ground forces battling IS. With U.S. air support, the Kurds drove IS from much of northern and eastern Syria in a costly four-year campaign.

The announcement of a pullout was widely seen as an abandonment of a loyal ally.

"The decision to pull out under these circumstances will lead to a state of instability and create a political and military void in the region and leave its people between the claws of enemy forces," the SDF statement said.

Kurdish officials and commanders met into the night, discussing their response to the decision, local residents said Thursday. A war monitor said among the options seriously discussed was releasing thousands of Islamic State militants and their families from various nationalities who are being detained in prisons and camps run by the Kurdish force. It was not clear whether any decision was made, and SDF commanders were not immediately available for comment.

The U.S. announcement came at a particularly tense moment in northern Syria. Turkish President Recep Tayyip Erdogan has repeatedly threatened to launch a new offensive against the Kurds but in recent days had stepped up the rhetoric, threatening an assault could begin "at any moment."

Turkey views the People's Protection Units, or YPG, the main component of the Syrian Democratic Forces, as a terrorist group and an extension of the insurgency within its borders. U.S. support for the group has strained ties between the two NATO allies.

Arin Sheikhmos, a Kurdish journalist and commentator, said "we have every right to be afraid."

"If the Americans pull out and leave us to the Turks or the (Syrian) regime our destiny will be like the Kurds of Iraqi Kurdistan in 1991 — million of refugees, there will be massacres. Neither the regime, not Iran nor Turkey, will accept our presence here," he said.

In northeastern Syria, Kurdish fighters have been digging trenches and defensive tunnels, preparing for the threatened Turkish offensive. Turkish tanks and armored vehicles are deployed on the border, with thousands of allied Arab Syrian fighters mobilized to join in the attack.

The threat from Turkey could drive the Kurds into the arms of Syrian President Bashar Assad, and by extension his backers, Russia and Iran. Russia has waged an air campaign in Syria since September 2015, changing the course of the war in Assad's favor and helping his forces reclaim control over most of the country's territory.

In new tweets, Trump on Thursday defended his decision, saying it should be "no surprise." He claimed that Russia, Iran and Syria "are not happy about the U.S. leaving, despite what the Fake News says, because now they will have to fight ISIS and others, who they hate, without us."

The contention contradicts predictions that the Syrian government and its allies would attempt to fill the void created by the withdrawal of U.S. troops.

Shortly before Trump began tweeting, Russia's Putin welcomed the decision to withdraw U.S. forces from Syria, saying he agreed with Trump that the defeat of the Islamic State group removes the need for the U.S. military presence. Russia has long held that the U.S. presence in Syria is illegitimate because it hasn't been vetted by the U.N. Security Council or approved by the Syrian government.

A Syrian member of parliament, Peter Marjana, said Thursday that a U.S. pullout would be a "recognition that Syria has won." He spoke in comments published by the Syrian daily Al-Watan.

Ebrahim Ebrahim, a Syrian Kurd based in Europe, said of the pullout: "It is not just treason to the Kurds or the people of Syria but to democracy, to morals. ... Yes, true, we fought for ourselves, but we also fought for democracies all over the world."

Trump's contention that IS has been defeated contradicted his own experts' assessments and shocked his party's lawmakers, who called his decision rash and dangerous.

Earlier this month, Kurdish fighters entered Hajin, the last IS enclave in Syria, but battles continues. Government forces and allied Iranian militiamen are present on the other side of the Euphrates River.

The U.S. began airstrikes against IS in Syria in 2014 and later sent in ground troops to aid Kurdish forces. Trump abruptly declared their mission accomplished in a tweet Wednesday.