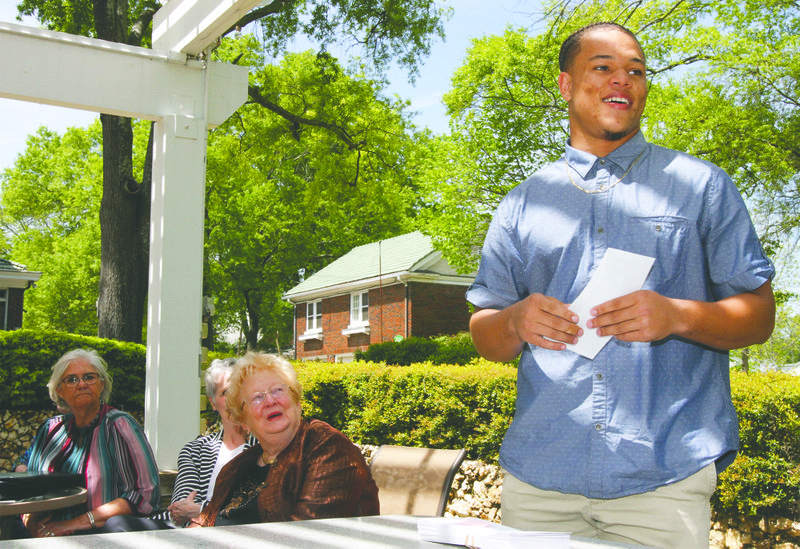 The UCCF Board of Directors awards grants from their Union County Public Trust Fund, their only discretionary fund, every year. They also gave several grants from funds created for specific charitable purposes.

UCCF Executive Director Elise Drake said the Public Trust Fund has grown from $50,000 to $1 million dollars in the past 15 years and that the UCCF’s funds total as much as $20 million.

At the start of the ceremony, Martha Wells, one of the UCCF’s major donors, spoke about how her family became involved with the organization. The Madelyne M. and Edward C. McCarty Fund was established 19 years ago to support local education and community enhancement projects.

Wells awarded a grant totaling $7,861 to the El Dorado Education Foundation for their Girls Learning About Math and Science (GLAMS) program. The program is designed to encourage eighth-grade girls to cultivate an interest in the Science, Technology, Engineering and Math (STEM) fields by introducing them to women in those careers and having them participate in experiments. Alice Mahoney, who accepted the award, said that when the program was founded, 50 girls signed up, but this year already 249 young women have registered.

“I went to GLAMS last year and I’ll say I was extremely impressed,” Wells said.

Wells and Martha Ragsdale, chairman of the UCCF Grant Committee, proceeded to hand out checks to the rest of the grant recipients. The grants and their recipients were as follows:

• From the Sara A. Norris Fund, Barton Library was awarded $10,801, which Library Director Nancy Arn said would go towards the general maintenance of the library system.

• From the Allie Johnson Persistence of the Spirit Fund, the Boys and Girls Club of El Dorado was awarded $500, which was presented to their Youth of the Year, Cecil Delphin. Delphin said that the money would go a long way in helping him when he goes to college next year at the University of Louisiana at Monroe to study biology.

• From the Jodie Mahony Honorary Fund, the Union County Single Parent Scholarship Fund was awarded $2,174. The award was accepted by UCCF Board Chairman Rodney Landes, who said the scholarships would go towards helping to keep single parents in school.

• From the Proctor Hill Memorial Fund, St. Mary’s Episcopal Church was awarded $115,954. A representative from the church said that the money would go towards the general operating expenses the church incurs, within the bounds of the grant’s guidelines.

• From the Proctor Hill Memorial Fund, the South Arkansas Historical Preservation Society was awarded $115,598, for literacy and artistic purposes.

• Not announced at the ceremony, the UCCF’s Public Trust Fund was awarded $2,116 from the Gladys and Homer T. Rogers Fund.

The rest of the grants awarded today were from the UCCF’s Public Trust Fund. The unrestricted fund was established in 1991 to benefit the community at large, according to the organization’s website. Landes described the grant application process and said that each of the proposals are read separately by the grant committee then ranked. The Public Trust Fund funded 25 grants this year, totaling over $48,000.

• UAMS – South Arkansas Center on Aging Education Center was awarded $2,000 for their Healthy Eating And Tasting (HEAT) program. The program funds healthy catered meals for those that attend classes, where attendees learn about good dietary choices.

• Hannah Pregnancy Resource Center was awarded $2,000 for their Reduce and Prevent Teen Pregnancy Initiative. Kristyn Bryan, the Hannah Center’s Client Education Coordinator, said that they would also be launching their new Fatherhood Initiative soon, where current and soon-to-be fathers can learn parenting skills.

• Economics Arkansas was awarded $2,000. Kathleen Lawson accepted the check on the group’s behalf. The money will go towards professional development workshops that will prepare educators for standards imposed by Act 480, which says that The Department of Education will develop personal and family finance standards. That will include teaching K-12 students about income, money management, credit and job preparedness.

• Community Living Arrangements was awarded $2,000 for a new treadmill at Champagnolle Landing.

• Boy Scouts of America – DeSoto Council was awarded $2,000 for Camp DeSoto. Ted Woodlock, Scout Executive/CEO of the DeSoto Council, accepted the award and said that the money would pay for cots and new harnesses and rope for the zipline at the camp.

• The Barton Library was awarded a second grant, this one for $2,000, which Arn said would go towards buying three of their five branches new computers.

• The Single Parent Scholarship Fund was awarded a second grant, this one for $2,000, which will also go towards scholarships to help single parents stay in school.

• The Area Agency on Aging of Southwest Arkansas - Union County office was awarded $1,980. The money will help to provide seniors with personal alarms, including wireless alarms for those without landline phones.

• The South Arkansas Children’s Coalition was awarded $1,000. Part of the money will help to provide children in the foster care system with “court bags,” which include snacks and activities for the children that have to appear in court. The rest of the money will go towards gifts children receive when they graduate the Children’s Advocacy Center program.

• The Imagination Library of Union County was awarded $2,000 for the Dolly Parton Imagination Library Program. The check was accepted by Alexis Alexander. She said that the average kindergartener, by the time they start school, has watched over 5,000 hours of television, more time than it takes to obtain a bachelor’s degree. The Imagination Library program sends a free book to children from birth til they reach five years old and this grant will pay for books.

• Turning Point was awarded $2,000 to go towards teaching materials for violence prevention education.

• The South Arkansas Symphony was awarded $2,000 for their Up Close and Personal 2.0 program. Executive and Music Director Kermit Poling accepted the grant and said that the program will allow guest artists that perform with the Symphony to give presentations to high school students that are interested in pursuing careers in music. Natasha Korsakova, performing with the Symphony on May 12, will speak with El Dorado High School students the day before her performance thanks to the program.

• South Arkansas Fights AIDS was awarded $2,000. SAFA Director Janet Beane said that the money would buy 100 oral HIV tests and the literature the organization gives out alongside the tests.

• The South Arkansas Developmental Center for Children and Families was awarded $2,000. The Center addresses the needs of developmentally delayed children and adults, serving children from eight weeks to five years old and adults from 18 to 100+.

• Habitat for Humanity was awarded $2,000, which will pay for landscaping at Habitat Home #41.

• The South Arkansas Arts Center was awarded $2,000, which will fund student scholarships for their summer camp series. The half-day classes will include a ballet camp, an art camp, two different movie making camps, glee camp and drama camp.

• Red River Radio was awarded $2,000. Poling, who is also the general manager at the NPR affiliate, accepted the award and said that it would go towards a community connections series in the works. El Dorado’s Red River Radio station is KBSA, channel 90.9.

• HOPE Landing was awarded $2,000. The award was accepted by HOPE Landing President and CEO Kristi Lowery and staff speech-language pathologist Rachel Ball-Cole. They said that the center was required to give each client a comprehensive evaluation in order to design a plan of care and the clients are re-evaluated annually. The money will go towards evaluation materials.

• Fairview Community Development Association was awarded two grants, each totaling $1,000. The first will go towards the organization’s Waiting to Excel Literacy Camp, which engages Washington Middle School and Barton Junior High School students with reading throughout the summer, in order to curb any regression that may happen otherwise by the time students return to school in August. The second grant will go towards their Give a Kid a Chance school supply drive, which takes place the Saturday before school starts and provides school and dental hygiene supplies to students. Wayne Gibson, who accepted the award, said that they are also planning a school supply drive for January, when students return for winter break and that they hope to be able to provide clothing for students in the future.

• El Dorado School District was awarded $2,000 for Phase Two of their Fitness for Everyone program. Coordinated School Health Administrator Debbie McAdams said that the money will purchase a new treadmill.

• El Dorado Connections was awarded two grants, each totaling $1,000. The first will go towards their Socks for Seniors initiative, which provides a pair of socks to every senior that resides in a local nursing home or assisted living facility. The second grant was for their El Dorado Express program, which provides transportation for seniors 60 years or older within a 300 mile radius.

• The El Dorado Education Foundation was awarded $2,000 for their Bridge to College Algebra course. It is a summer class that occurs over four weeks that helps students prepare for college algebra. Since it began, almost 300 students have completed the program.

• The Boys and Girls Club of El Dorado was awarded $2,000, which will go towards their new Teen Center.

• The Agape House Children’s Home was awarded $2,000. The money will go towards a security system at their Hope House, a transitional home for children aged 16 to 21.

• Camp Fire was awarded two grants, one totaling $850 and the other $600. The first grant will go towards art and cookie decorating classes for K-12 students. The second grant will go towards the group’s College 101 program. Designed for high school seniors, they will learn basic life skills like budgeting, simple sewing and how to do laundry, amongst other things.