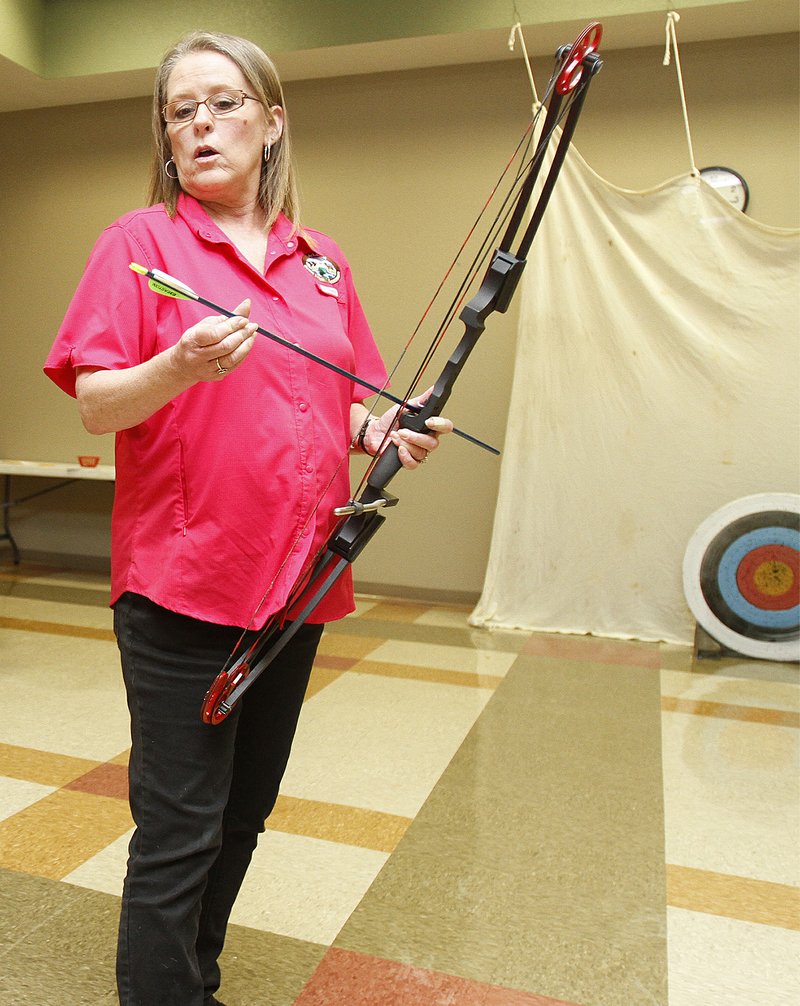 EL DORADO— Laura Rogers, regional education coordinator at the Arkansas Game and Fish Commission (AGFC), says women have made terrific impacts in the field of conservation. Rogers discussed some of the important women in wildlife conservation at the South Arkansas Community College for Women’s History Month on Tuesday.

Out of the 659 AGFC employees, 176 are women. Three of the division chiefs are women, two of the assistant chiefs are women and six of the wildlife officers who work out in the field are women. Some important women in Arkansas’ wildlife conservation include Major Stephanie Weatherington, who is the State Boating Law administrator and is “probably the top ranking female within our enforcement division,” Rogers said.

Captain Nakia Crims, the District Enforcement captain, is in charge of one area of game wardens and has 12 wildlife officers under her, all of whom are men. Caroline Cone is currently the AGFC Chief of Staff. Also, Pat Peacock served as the AGFC Commissioner from 1994 to 1995, and is the only woman to win the world duck calling contest.

Rogers also discussed other important women in wildlife conservation that were not in Arkansas.

Mandy Murie is known as the grandmother of the conservation movement. She was the first woman to graduate from the University of Alaska Fairbanks and was a strong supporter of the Arctic National Wildlife Refuge.

She served on the governing council of the Wilderness Society and attended the signing of the Wilderness Act by President Lyndon Johnson in 1964. President Bill Clinton awarded her the Medal of Freedom in 1998 for her life time achievement in conservation.

Celia Hunter created the Alaska Conservation Society and worked with Murie to safeguard the Arctic National Wildlife Refuge. She was the first female president of the Wilderness Society and received the John Muir Award in 1991. “There’s not very many women who were heads of national conservation organizations,” Rogers said. “So that’s pretty impressive.”

Rachel Carson was employed by the U.S. Fish and Wildlife Service (USFWS) in 1943, but only served nine years after retiring early to begin writing. She wrote the book “Silent Springs” in 1962 and a number of things transpired after the book was printed. In 1963, the Clean Air Act was issued; In 1967, the Air Quality Act was published; In 1970, Earth Day, the National Resources Defense council and the Environmental Protection Agency were all established; In 1971, Green Peace was placed and in 1972, the Clean Water Act was enacted.

“In 10 years after her book was written, all these things came to be because she shed so much light on the things around us in our environment,” Rogers said.

In 1947, Elizabeth “Betty” Losey lived in Michigan and had a hard time getting employed with the Michigan State Game Division because they didn’t want a woman in the field over night. They finally hired her and let her work from a cabin. In 2003, she was named National Wildlife Refuge Association Volunteer of the year.

Mollie Beattie was the first female director of USFWS in 1993. Before becoming director, she was commissioner of Vermont Forests Parks and Recreation and deputy secretary of Vermont Agency of Natural Resources. Under her command in the USFWS, which consisted of three years, they created 15 new wildlife refuges. She also had a hand in reintroducing the gray wolf into the northern Rocky Mountains. “Those are some serious accomplishments for a woman in that type of position,” Rogers said. “Especially when she was only there for three years.”

“It was just interesting to me to learn about all of these women who had such serious jobs and responsibilities,” Rogers said. “I’m no feminist, but I’m very impressed by the kind of stuff that I found out.”

Arkansas has four nature centers and four education centers. Of those eight centers, five of them have female directors at their facilities, Rogers said.

One program that Arkansas offers for women is called Becoming an Outdoors Woman (BOW), which takes place in Little Rock once a year. It is a weekend-long program that offers a variety of classes exclusively for women.

Some of the classes offered include introduction to firearms and trap shooting, fly fishing, camping and much more. This year the event will take place from Sept. 29 to Oct. 1. “It’s and environment where if you don’t want to ask your husband or you’re a little intimidated about even holding a rifle, trying to start a fire or driving a boat, you can go learn that,” Rogers said. “Your fee covers your lodging, meals, all of your classes and tons of stuff that you take home.”

There have been several classes offered in Union County including archery and fishing.

Currently, there are no upcoming classes scheduled in Union County, but Rogers encourages you to contact her if there is a certain activity you are interested in.

Rogers can be reached by email at [email protected] agfc.ar.gov.

Liz Young of the Arkansas Women’s Business Center will speak about Women in Agriculture at the SouthArk Library on March 27 at 6 p.m.

Kaitlyn Rigdon is a staff writer at the El Dorado News-Times and she may be reached at 870-862-6611 or by email, [email protected]