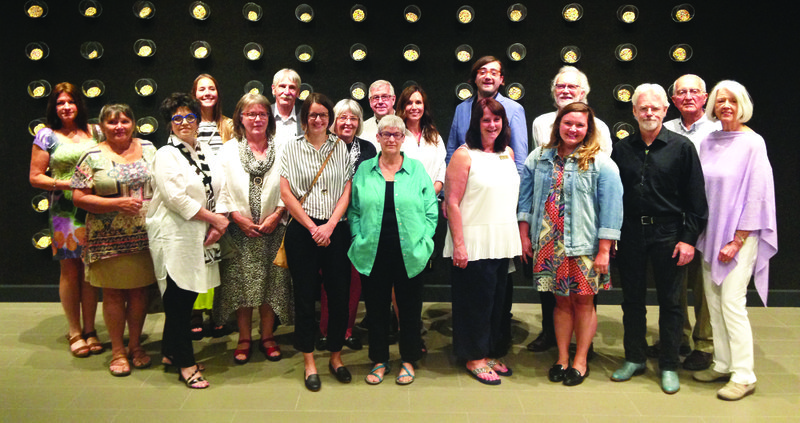 Among the artists from across the country entered into the arts center’s 2017 Juried Art Competition – a record number of 17 regional artists attended the recent awards reception.

The visual arts committee of the South Arkansas Arts Center has announced the award-winning entries for the 2017 Juried Art Competition and exhibition, sponsored by Smackover State Bank. The awards were presented by guest juror Dylan Turk, curatorial assistant at Crystal Bridges Museum in Bentonville, during a recent artists’ reception at SAAC.

Turk selected the works for the competition from over 300 submissions made by artists from across the country. Prior to the artist reception, he selected the award winners from the exhibition, currently on display in the Merkle and Price Galleries until July 28.

Best of Show was awarded to Kit Gilbert of Ruston, Louisiana, for her mixed media on canvas entry, “The Harvest.” First place went to Ahrong Kim of Philadelphia, Pennsylvania, for “Hemicrania,” a stoneware, porcelain and luster piece.

Second place was awarded to Elinore Schnurr of Long Island City, New York, for her oil on linen painting titled, “In Our Mind’s Eye.” Third place went to Kellie Lehr of Fayetteville, for her oil on canvas painting, “Shinrin-Yoku.”

The People’s Choice award will be voted on by patrons who come to see the exhibition and will be announced at the end of the show. Local and area residents are urged to vote for their favorite artwork at the arts center.

For more information about the 2017 Annual Juried Art Competition, or any of SAAC’s open art competitions, contact the SAAC office at 870-862-5474 or visit the website at saac-arts.org. SAAC is located at 110 East Fifth Street, El Dorado, Arkansas.