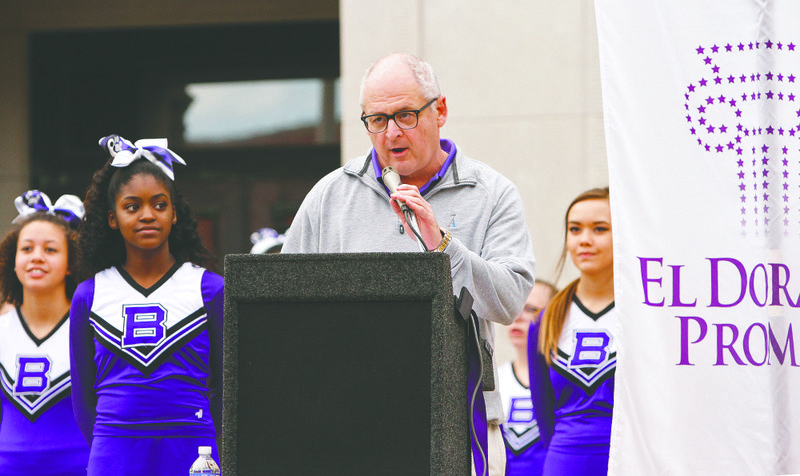 EL DORADO — There have been two U.S. presidents, along with governors, senators and local and state officials that have gathered at El Dorado High School to encourage students and participate in 10 historic Academic Signing days for El Dorado Promise graduates.

Today marks the 10th anniversary of the announcement of the El Dorado Promise – a $50 million scholarship gift from Murphy Oil Corp. to graduates of El Dorado High School. A community-wide event to celebrate the Promise will be held from 4 until 6 p.m. on Feb. 2 at the El Dorado Conference Center.

As students filed into the gymnasiums at the old and new El Dorado High Schools on Academic Signing Days every year since 2007 when the Promise was announced, they have been dressed in purple graduation gowns and worn purple El Dorado Promise baseball caps. At the conclusion of every ceremony, they have picked up purple and white ink pens and signed academic letters of intent to further their education after high school by attending a two- or four-year college.

From 2007-2016, Promise scholarships have been awarded to over 2,000 students who have attended 129 different colleges and universities in 29 states, according to Sylvia Thompson, director of the El Dorado Promise.

The first academic signing day was held May 17, 2007 and Claiborne Deming, then president and chief executive officer of Murphy Oil Corp., and Bob Watson, then superintendent of the El Dorado School District, were the guest speakers, talking to more than 200 EHS seniors who made history that day as the first Promise recipients.

Deming and Watson had announced on Jan. 22, 2007 that Murphy Oil had pledged a $50 million scholarship gift to graduates of El Dorado High School. The scholarship pays tuition and mandatory fees, based on the length of time a student has been enrolled in the El Dorado School District.

“What’s happening today is exactly what we hoped would happen,” Deming said during that first academic signing. “To the Class of 2007, be ambitious, take smart risks and work hard. Work your tails off for the next four years and you will succeed,” Deming told students.

“You are a part of history today,” Watson told students. He commented about the strength of the El Dorado Promise for the school district and the community and thanked Murphy Oil for the Promise. “It’s a joy to be a part of this,” he said.

On April 30, 2009, Skip Rutherford of Little Rock, who served at that time as the dean of the University of Arkansas Clinton School, was the guest speaker. At that signing, 95 percent of the El Dorado High School 2009 graduating class signed letters of intent to attend a college or university.

“I’m glad to be back in the Promise Land – home of the Arkansas State football champions – the El Dorado Wildcats,” former President George W. Bush said to a crowd gathered Thursday afternoon for the academic signing. “I am uplifted by the spirit here,” he said, thanking principals, the superintendent and “especially the teachers. Yours is a noble profession,” he told teachers, urging 2010 EHS graduates who have not decided a college major, to “think about teaching.”

He told students, parents and invited guests that going from president to citizen was like going from “100 miles per hour to zero. I am impressed by Murphy Oil Corporation and Madison Murphy,” Bush said, telling students, “They set aside money for people they don’t know so they can go to college. That’s impressive.

“Murphy Oil Corporation has set a good example of what it is like to be a good citizen,” Bush said. “Being a good parent is also important,” he said, congratulating parents of EHS graduates. He asked students if they were ready to “commit to this gift” and said he had been told that 20 percent of the 2010 graduating EHS seniors are the first in their families to go to college. “Aim high, study hard and make good choices,” he urged students. Over 250 graduating seniors signed Academic Letters of Intent in 2010.

Madison Murphy of El Dorado, a member of the Arkansas Highway Commission, the Academic Signing Day Committee and the Murphy Foundation, introduced the president that year and presented him with an El Dorado Promise baseball cap. Bush briefly donned the cap before he addressed students. Murphy said Bush is the only sitting U.S. president to ever visit the “center of the universe – El Dorado. Thank you, Mr. President, for being here.” Bush had visited El Dorado in April 2004 and met with education and local officials at South Arkansas Community College at that time.

Also during the fourth academic signing, Dr. Tom Kimbrell, who was Arkansas Commissioner of Education at that time, said, “I have seen what the Promise has done for this community. This is an opportunity for you to get your major league job and I challenge you to take this opportunity.”

U.S. Senator Mark Pryor was the guest speaker for the April 28, 2011 – fifth annual – Academic Signing ceremony. Cheers greeted about 260 seniors as they walked down the steps to the gymnasium floor at El Dorado High School that day. Kimbrell also spoke during the fifth signing and Pryor and Kimbrell were joined during the ceremony with a video presentation by Arne Duncan, U.S. Secretary of Education, in congratulating students.

“I’m honored to be here. I have been cheering on the El Dorado Promise,” Pryor said, also thanking Murphy Oil for their gift to EHS graduates. “The Promise has created national recognition for El Dorado and the entire community has rallied around the El Dorado Promise,” he said. “I am very proud of you all making good decisions to go to college,” he told graduates. He said the Promise is taking the financial burden out of the equation to go to college and reminded students to “work hard and persevere.”

President Bill Clinton was the guest speaker for the April 17, 2012 – the sixth annual Academic Signing and addressed more than 300 EHS graduates – in the new high school gymnasium.

The 2012 graduates were the first to graduate from the new state-of-the-art $43 million El Dorado High School. “This is the best looking basketball gym in America,” Clinton told students.

“I spent many happy days in El Dorado,” the president said, adding, “And I want to tell you I miss Bill Nolan (a well-respected El Dorado businessman who had died earlier that year) and Jodie Mahony” (of El Dorado, a long-time member of the Arkansas House of Representatives and Senate, who died in 2009 and was described as a “champion of education”).

Clinton praised Murphy Oil Corp. for their gift to EHS graduates and said, “I wanted to come here (to the Academic Signing ceremony) because as nearly as I can tell, there is no community in the U.S. where a company like Murphy Oil has made this big a commitment. Ninety percent of the (EHS) students eligible for this scholarship go on to college,” Clinton said, explaining that the state average is 63 percent and the national average is 67 percent.

Shane Broadway, who was a state senator and interim director of the Arkansas Department of Higher Education in 2013, was the guest speaker for the seventh Academic Signing held on May 14 of that year.

Saying he was honored to stand in the spot where two former U.S. presidents had been, Broadway told students, “This is an amazing day, to come to a community where a corporation and the community work together to provide” students with exceptional means to further their education after high school. “You are part of something not many people in America can say. Congratulations on making it to this day,” Broadway told 2013 EHS graduates.

Shortly before the eighth annual Academic Signing, scheduled to be held April 28, 2014, a devastating tornado struck the communities of Vilonia and Mayflower in Arkansas – killing 15 people and causing extensive damage. Because of that tragedy, the scheduled guest speaker, then Governor Mike Beebe, was unable to attend the Academic Signing.

Superintendent Bob Watson filled in as guest speaker and addressed the more than 300 seniors who participated in the signing that year. The crowd gave a standing ovation to Watson, who earlier that year had announced his retirement after almost 30 years at the helm of the El Dorado School District. He was introduced by Deming, who described Watson as “one of the most extraordinary leaders I’ve ever known.”

Deming said Watson seeks out all opinions before he makes a decision and has an “uncanny balance of competing interests when he makes a decision. He is smart and fair. He can make hard decisions and can get the message out as effectively as I’ve ever seen. He’s a great communicator, fair and decisive. Our district has been so fortunate to have Bob and our district is better because of Bob Watson.”

Watson encouraged seniors to acknowledge the people who have helped them graduate, including their parents, grandparents, family, friends, teachers, administrators, school board members and leaders in the business community who have partnered with the school district throughout the years. “They have supported you in every way possible,” he said.

“You have done well,” he told students, noting they have “stepped up to a more rigorous curriculum” and more students are taking entrance exams to attend a college or university, and test scores in math and literacy have improved. EHS students are taking more Advanced Placement tests in an increasingly “challenging curriculum,” he said.

Arkansas Governor Asa Hutchinson was the guest speaker for the ninth Academic Signing on April 14, 2015 and praised the effects of the Promise. Businesses, industries, individuals and the community of El Dorado have “all come together and it is paying off. El Dorado is the biggest comeback story in Arkansas,” Hutchinson told the almost 300 graduating seniors, their parents, teachers, friends and relatives.

The governor mentioned several El Dorado businesses and industries by name and praised them for adding new jobs to the economy of the city and also talked about the proposed El Dorado Arts and Entertainment District. “It is exciting what is happening in El Dorado,” he said.

“The foundation of all of this success is the El Dorado Promise,” Hutchinson said. “The Promise attracts families, businesses and by creating El Dorado High School graduates (with scholarships to pay for higher education), it has created a cycle of success in El Dorado. I like seeing all the smiles and optimism.”

And last year, for the 10th annual Academic Signing, Stephen Jones, chief operating officer and executive vice president of the Dallas Cowboys, along with Arkansas’ First Lady Susan Hutchinson, were the guest speakers on May 13, 2016.

Speaking to what he described as as “sea of purple” in the EHS gymnasium that day, Jones urged about 300 graduates to “do something special with your life” and embrace the opportunity they have been given by Murphy Oil Corp. and the El Dorado Promise Scholarship.

“Be thankful, grateful, push yourselves to see what you can do,” Hutchinson said, urging students to thank those whose generosity has made it possible financially for the graduates to attend college.

“You are going to have to take risks to be great,” Jones told graduates, urging students to “work hard, be passionate about your work and be accountable. Don’t be afraid to take risks. I applaud all of you for success and the great opportunity you have because of Murphy Oil.”