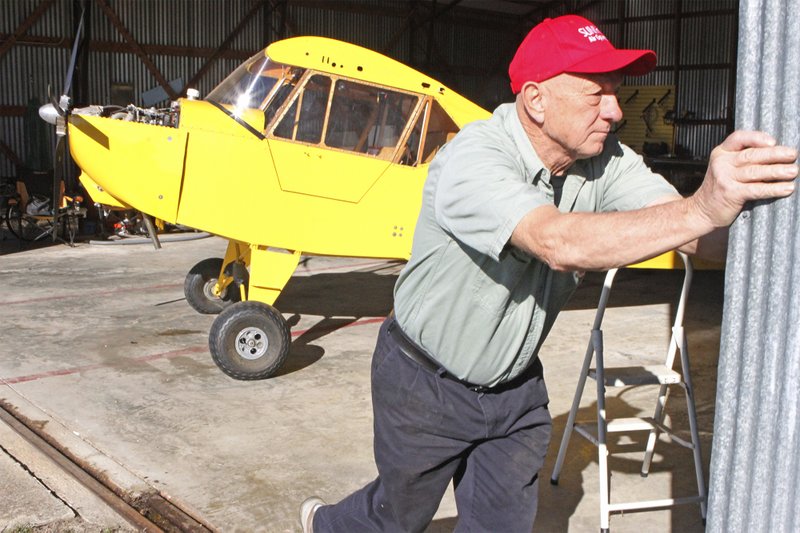 Since he was a boy, Mike Makepeace has been around airplanes, both model and full-size aircraft.

Watching his father, the late Kenneth Makepeace, build and fly experimental aircraft and other types of home-built planes, as well as construct and operate model airplanes, ignited a passion in Mike Makepeace.

So it’s no surprise, then, that the younger Makepeace would take up airplanes as a serious avocation.

He holds dual memberships in the local chapter of the Experimental Aircraft Association and the Model Aviators of South Arkansas.

Makepeace and other members of both groups would like to spread the word about what the EAA and MASA in hopes of stoking interest and attracting new members. The group is seeking members, particularly youngsters who may have aspirations of becoming pilots and who are interested in fashioning their own airplanes, or joining the ranks of model-airplane culture.

During a recent tour of EAA-associated hangars at the Downtown Airport, Makepeace shared an intimate and encyclopedic knowledge of home-built aircraft, including different types of building materials — wood, aircraft fabric, steel, and fiberglass; construction styles and designs — geodetic, which looks similar to basket-weaving and provides rigidity, is one style; the various controls and functions; trends; and aircraft categories and requirements (“For the ultralight, you don’t need a pilot’s license,” Makepeace explained).

He gestured toward a 1953 Colt and launched into a description with a command that only someone who has grown up around aircraft can convey.

“It has pedals that move the rudder. It’s all wood with fabric over the wood. It’s an experimental plane,” he said.

Makepeace said he has about six planes that are in various stages of construction that he hopes to get flying.

Mayor Frank Hash, president of the local EAA Chapter 626, offered a tour of his own hangar, which houses a sunny-yellow two-seater that Hash built and fondly calls “Sweetie Bird.”

“Well, I can’t take credit for that. I built it from a kit,” Hash acknowledged.

Makepeace later shared that the mayor’s plane is powered by a car engine.

“My first ultra light had two chain saw motors on it in 1979,” Makepeace laughed.

“The mayor’s (plane) is for going somewhere, traveling. Mine are mostly leisurely flights. I’ve slowed down. I don’t go up as much as I used to,” he said.

Though he may not use his home-built planes for travel much these days, Makepeace and his family set aside the dates each year for the EAA’s largest annual event — the EAA AirVenture Oshkosh Fly-In, Air Show, and Convention in Oshkosh, Wisconsin, which draws crowds that number in the tens of thousands.

Makepeace also heads south each year to Lakeland, Florida, for the Sun N’ Fun Fly-in Expo, which aims to raise education about aviation.

“Those are the two biggest gatherings of the EAA,” he said.

The local chapter has hosted its own fly-ins and other events, including organizing a display and rides of a vintage WWII bomber, the B-17 Flying Fortress, at South Arkansas Regional Airport at Goodwin Field.

Makepeace, who is treasurer of Chapter 626, said that of the 20-member roster, there are about 12 active members.

Hash and Makepeace said they would like to see those numbers grow.

Joining the EAA is simpler than people may think, said Hash, an Army-trained pilot who flew medical evacuation missions in helicopters in Vietnam.

The group regularly meets and hosts out-of-town guests, fellow aviation enthusiasts, at its clubhouse at the Downtown Airport.

Hash said Chapter 626 is looking to host some workshops on how to build airplanes in the spring.

Makepeace said interest in model aviation in El Dorado has grown slowly, but steadily over the years, adding that MASA is working to draw even more interest out to the model airfield that is named after his father — to whom Hash referred as a “master modeler” — at 736 Industrial Road.

Step into his workshop, which is adjacent to his residence on Moro Bay Highway, and you’ll immediately be introduced to his “big boy toys,” an expansive, wall-and-ceiling-covered collection of model planes in all shapes, sizes, and eye-popping colors.

Power sources for the models are just as diverse as the planes themselves.

The tiniest ones were built with lightweight, flexible sticks and condenser paper.

Makepeace casually demonstrated how the model’s propeller is powered by the simple winding of a rubber band.

“It’s lighter than a penny. These are the ones we fly in gyms and use in contests,” Makepeace said, as the free-flight aircraft breezed through a few circuits around the workshop before beginning its descent.

Other, heavier models are flown using control lines (two wires that are manipulated to fly the plane in a circle) or with radio-controlled engines.

“They can have a six-inch wingspan to almost anything you can imagine. Some guys are flying them with a 15-foot wingspan,” Makepeace said.

“And they can look anything like a full-scale airplane to a strange-looking something,” he continued.

Some who visit Kenneth Makepeace Field also fly model helicopters and even rockets, he said.

Two control-line model aviation contests are hosted at the field each year, and they draw spectators and participants from Louisiana, Texas, Oklahoma, and Georgia — many of whom stay overnight for the two-day event.

“The farthest somebody came last year was from London. He was the friend of a member, and he flew into Dallas, came to El Dorado for the competition and went back home,” Makepeace said.

“There’s no competition. You just come out play,” he said.

The group regularly holds swap-meets in which buyers and sellers have their choice of remote-control planes, cars, boats, and helicopters.

The most recent swap-meet was held on Feb. 4.

Raffles are also part of the events.

Makepeace said the model airfield is open for anyone who would like to come on Sunday afternoon, weather permitting.

MASA also has facilities with instructors who can offer training for flying model aircraft.

“The public is welcome to come out. You don’t have to have a model,” he said, stressing the invitation is also extended to children.

“We’d love to have kids come out. We don’t see quite as many as we used to,” he said.

Hash said such gestures are important to help highlight the economic benefits and services that the aviation industry brings to El Dorado and Arkansas.

For the proclamation, Hash received kudos from the Alliance for Aviation Across America, a nonprofit group that was formed in 2007 to support the interests of the general aviation community across various public policy issues.