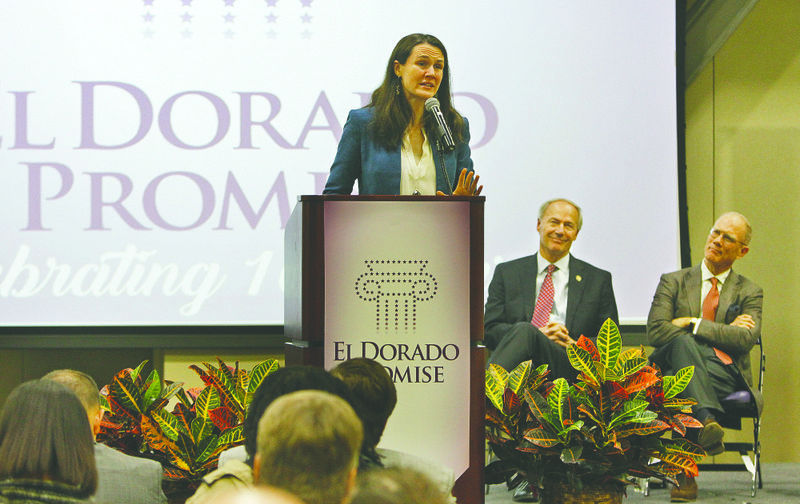 Liz Murray, author and motivational speaker who was homeless at age 15 and completed her degree at Harvard in 2009, was the keynote speaker.

To the “young people in El Dorado, college is an opportunity. I am thankful to Claiborne Deming and Murphy Oil Corporation for their vision for the El Dorado Promise,” the governor said. Describing the El Dorado Promise as unique and “hard to replicate,” Hutchinson said the breadth of the scholarship is “incredible and extraordinary. I have never been more optimistic about El Dorado and the State of Arkansas.”

“It’s hard to believe it’s been 10 years,” Deming said to the crowd, remembering the “release of emotions,” that occurred when the Promise was first announced in the gymnasium of the old El Dorado High School. “People were weeping” and all of the milestones that have been accomplished by Murphy Oil since the company was founded by Charles Murphy over 80 years ago – “none compare to the El Dorado Promise,” he said.

The El Dorado Promise provides opportunities to about 300 graduates each year “regardless of race, color, creed. We provide the opportunity and they have to take it and go with it,” Deming said. The Promise has not only provided the way for over 2,000 EHS graduates to attend college, but has also provided an economic boost to South Arkansas. “It’s done freely; we don’t ask for anything in return – there are no strings attached,” he said.

Murphy Oil’s board of directors heard a 10-minute presentation about a proposal for an El Dorado Promise, had a 10-minute discussion and approved the scholarship program. “Our company could not be more proud,” Deming said. adding that the vote to fund the Promise was the easiest decision made that day.

Murray, who grew up as a child of drug-addicted parents in the Bronx in New York and has written a memoir titled, “Breaking Night: A Memoir of Forgiveness, Survival and My Journey from Homeless to Harvard,” told the crowd of her struggles as a child growing up in a home where there was little to eat and then becoming homeless at 15 when her mother died.

She told about her realization that an education was the key to a fresh beginning and after finally being accepted into a high school, a mentor, “Perry” had faith in her, encouraged her and challenged her to strive to realize her dreams. After being featured in a New York Times story, as one of six students who received scholarships to attend Harvard, Murray said her community came together, showed her that they cared and provided her with love and encouragement, in addition to the basic necessities of life. “I was embraced by community – there is no substitute for community.”

Murray said she “gave up on myself and felt I didn’t belong. Education provided life-changing experiences. It is important to never give up. Maybe I can encourage people not to give up on themselves,” she told those attending the Promise 10-year celebration.

“We need to acknowledge what people face in this country. Lots of people don’t have enough,” Murray said, encouraging those in the crowd to always be thankful for what they have and always look for ways to mentor and help others. “Don’t take for granted what you have. Do what you can – there is no substitute for mentoring.”

Tucker remembered that when the Promise was first announced, there were students that didn’t even know they had to register to attend a college. “Now, our kindergarten students, first, second, third graders all know about college and the Promise. Now our students are talking about SAT, ACT and classes to take” to prepare to enter college.

On Thursday to honor the Promise, members of the Arkansas State House of Representatives and local representatives Matthew Shepherd and Sonia Barker, recognized the Promise and letters were sent from former presidents, George Bush and Bill Clinton – both speakers during Promise Academic Signing Days at EHS – to acknowledge the 10-year success story of the Promise, Tucker said.

“This (the announcement of the El Dorado Promise) really touched my heart,” Watson said during Thursday’s ceremony. “Claiborne Deming got real good looking talking to me about the El Dorado Promise,” Watson laughed, explaining that the Promise has been encouraging to this community. “There was a new energy in education and the community – a vitality. People’s lives were impacted and I take my hat off to Claiborne Deming and Murphy Oil Corporation.”

“The El Dorado Promise not only ensures that every EHS graduate has an opportunity to go to college but it sparked a culture change within our district,” said Sylvia Thompson, El Dorado Promise director. “From the first day of kindergarten, our students know that they will have the opportunity to attend college regardless of their financial need or academic ability and the district has worked to ensure that students are prepared to take advantage of this opportunity to further their education.”

Antonio Miles, who was a fourth grade student in the El Dorado School District when the Promise was first announced, will graduate from EHS in 2019 and said she plans to major in dentistry, at either Harding University in Arkansas or the University of California at Irvine. Her words about the Promise were included in a publication titled, “A Decade of Promise.”