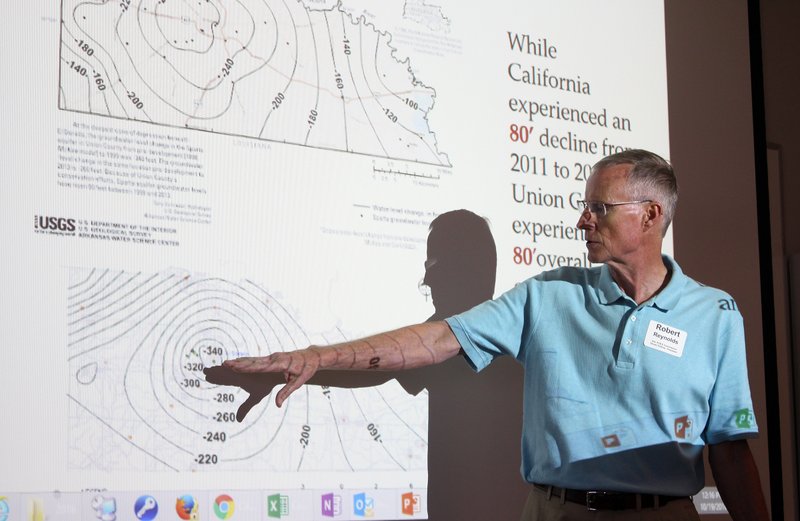 Rising aquifer levels: Robert Reynolds, volunteer advisor and a founding and former member of the Union County Water Conservation Board, explains the groundwater level change to the Sparta since measures have been taken to conserve the aquifer. Union County experienced an 80-foot overall groundwater level rise between 1998 and 2013.

EL DORADO — What does it take to revive and replenish a dwindling aquifer – the only source of drinking water for several counties in south Arkansas and parishes in north Louisiana?

Just ask members of two Sparta aquifer groups that met in Union County on Wednesday for an update on the Sparta Aquifer Recovery Plan – the Union County Water Conservation Board and Louisiana Sparta Groundwater Commission.

Union County’s only source of drinking and industrial water – the Sparta Aquifer – was declining rapidly in 1996, and was listed as a critical groundwater area. In 1999, a group of 11 local residents formed the Union County Water Conservation Board and in the span of a few years, water taken from the aquifer went from 21 million gallons per day to eight to nine million gallons per day.

Louisiana Sparta Groundwater Commission members and other Sparta stakeholders met Wednesday with members of the Union County board for a project overview and tour of the Ouachita River Alternative Water Supply infrastructure. The update and tour were presented by Sherrel Johnson, grants and special projects manager for the UCWCB and Rob Reynolds, volunteer advisor and founding and former board member of the conservation board. The meeting was held at Entergy/Union Power Station and was sponsored by GE Power & Water.

“We were pleased that a few long-time Louisiana colleagues and others who are new to the Louisiana Sparta Groundwater Commission paid Union County a visit,” Johnson said at Wednesday’s meeting.

“We’re not California – but we coulda’ been,” she said, explaining that in order to save the Sparta, several steps were taken by the UCWCB to save this area’s drinking water. The project included a 26-mile pipeline, an intake structure, water treatment facility and storage tanks, monitoring wells, the vote of the people to approve a one-cent sales tax and the willingness of four local plants – Lion Oil, Great Lakes Chemical, El Dorado Chemical and Entergy Power Partners – to use water piped from the Ouachita River instead of the Sparta.

After that dire announcement, Union County leaders declared that addressing the declining Sparta was the county’s top economic development priority. Johnson explained that at that time, no entity had authority to manage the Sparta and generate funding to save the declining source of drinking water in south Arkansas and north Louisiana.

She said that with the help and support of State Senator Jodie Mahony of El Dorado (now deceased) Act 1050 of 1999, allowed that critical groundwater counties could establish Critical Groundwater County Boards with unprecedented authority over groundwater.

And, because the water board had been working on ways to solve the declining Sparta problem, Union County in 1999 was ready to develop the Entergy Union Power Plant. “Likewise, developing the power plant expedited the water project and was key to doing so in time to save the aquifer,” she said.

The UCWCB was first appointed and then elected by voters in Justice of the Peace Districts to staggered terms. Next, the group levied a conservation fee and began assessing 24 cents per 1,000 gallons of water from significant users in September 1999.

By 2005, the UCWCB had built and paid for $65 million infrastructure and was delivering Ouachita River surface water to major industries in Union County – Lion Oil, El Dorado Chemical and Great Lakes. Water is also supplied from the river to irrigate Mystic Creek Golf Course and residential area and practice fields at El Dorado High School.

In December 2005, a “drowning the mortgage ceremony” was celebrated, turning on the surface water tap to El Dorado Chemical, Great Lakes and Lion Oil and paying off a $23 million debt three and a half years early.

Preston Spires with El Dorado Chemical – one of the plants that uses water from the Ouachita River – said Wednesday said the company now uses about 7.3 million gallons of river water a day. And completion of a recent $800 million expansion, would not have been possible without the use of river water.

“We would not have been able to expand without the Ouachita River water,” he said, explaining that the company now has about 200 full-time employees and during the expansion phase, El Dorado Chemical hired about 2,000 contractors for about a year – a tremendous boost to the local economy. An ammonia plant and nitric acid plants were added at the plant.

The mission statement of the UCWCB, now adopted by the Louisiana Sparta Groundwater Commission, is to “conserve, protect and maintain the Sparta Formation Aquifer as a continuing source of high quality, potable water for current and future consumers by providing for affordable, alternate sources of fresh water pursuant to the authority and responsibility granted by the State of Arkansas” (State of Louisiana).