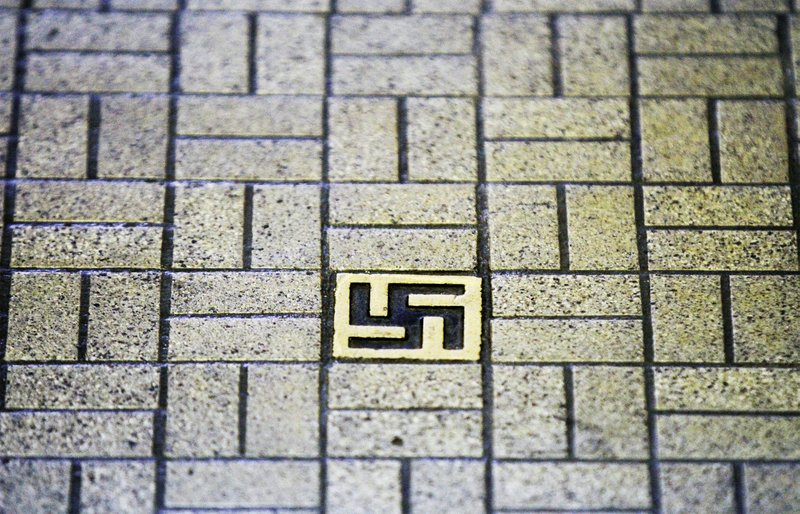 EL DORADO — A small ceramic tile in the Union County Courthouse floor has ignited controversy after a former city council member posted a photograph of tile on Facebook last week.

The tile in question features a swastika and is in the floor of the courthouse where voters exit from the voting booths, and the tile has been in the courthouse since the building was constructed.

The tiles are part of an ornate floor motif that can be found on the second, third and fourth levels of the courthouse.

The decorative tiles are spaced evenly between plain tiles and feature dozens of symbols, including the fleur-de-lis and oak leaves, among others.

As far as anyone at the courthouse knows, the swastikas in the county clerk’s office are the only such symbols inside the building.

Former El Dorado alderman Tony Henry posted a photo of the tile on Facebook with the comment, “Look what I walked into coming out the voters box at the Courthouse. This needs to be remove asap.”

Questions about the symbol have arisen before. In the Nov. 8, 2007 edition of the El Dorado News-Times, an article was published about the swastika-decorated tile.

“The swastika goes back thousands of years as a symbol of good fortune, and this building was built in 1928,” said County Judge Mike Loftin on Wednesday. “It is a swastika, I’m not denying that, but before Hitler and the Nazis, the swastika was considered to be an auspicious symbol for religions like Buddhism, Hinduism and Jainism.”

According to Wikipedia, ceramic tiles with a swastika design were produced by a number of North American manufacturers in the late 19th and early 20th centuries. The tiles were often installed in repeating patterns or in combination with related ancient symbols.

“In western architecture, pre-World War II swastika tiles are typically a minor decorative element and have only become

prominent when their original intent or symbolic meaning has been re-interpreted,” the website stated.

In some communities, swastika tiles have been removed from historic buildings after complaints from the public.

In May 2006, five terra cotta tiles were removed from St. Mary’s Cathedral in St. Cloud Minnesota, the oldest parish in the community. The church, constructed in the late 1920s, included a number of decorative tiles including a series of 10 that depicted ancient forms of the cross including the crux gammata, also known as the Gammadion, “hooked cross,” which is a swastika design.

In 2015, a Detroit columnist began a campaign to remove swastika tiles from the Detroit Athletic Club, designed by Jewish architect Albert Kahn in 1915.

However, in 2008, school officials decided not to remove swastika floor tiles with left-facing arms from a Duluth, Minnesota elementary school built in 1929.

Ethel Goodstein, professor of architectural history at the University of Arkansas at Fayetteville, told the News-Times in 2007 that George Richard Mann, who designed the courthouse, most likely used the symbols as part of the overall classical design that’s seen throughout the building.

“Knowing Mann’s work and orientations, I’m assuming that he is simply imitating a form that has been around literally for thousands of years,” said Goodstein. “It’s terribly unfortunate that the swastika has become synonymous with the idea of the Nazis. As far as I know, the first appearances of the swastika are in Egyptian hieroglyphics.”

Goodstein said Romans often incorporated the swastika in their architecture, using it as part of decorative tiles and patterns. Examples of swastika-like patterns would have been used as part of Mann’s classical training at the Massachusetts Institute of Technology, where he studied architecture, Goodstein said.

The courthouse is an example of Classical Revival design and has been listed on the National Register of Historic Places since 1983, according to the website arkansaspreservation.com.

For now, Loftin said he has no plans to remove the tile from the Union County Courthouse.

“We’re not going to do anything to it,” Loftin said. “It has been a part of courthouse since 1928, so we’re leaving it.”

Randal Curtman is the managing editor of the El Dorado News-Times and may be reached at 870-862-6611.