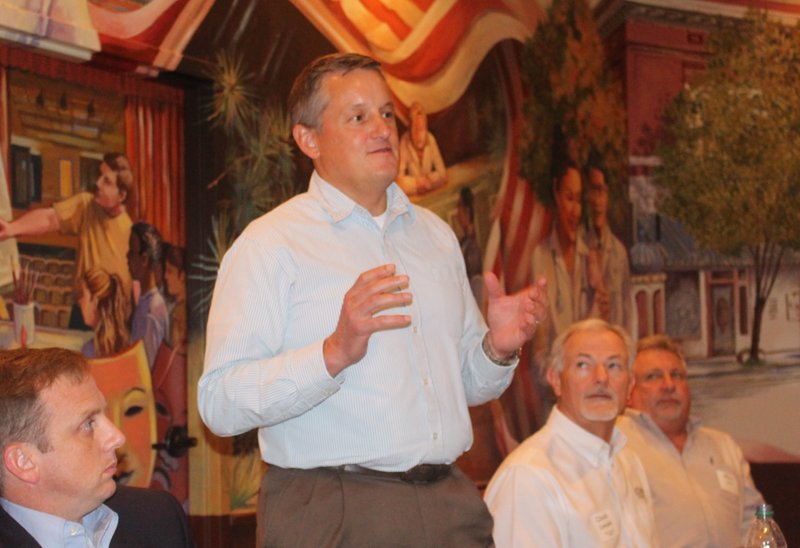 Westerman: The Union County Water Conservation Board held a luncheon for United States Representative Bruce Westerman to meet with the Sparta Aquifer recovery stakeholders at the El Dorado Chamber of Commerce on Tuesday.

EL DORADO —U.S. Rep. Bruce Westerman visited with the Union County Water Conservation Board on Tuesday during his daylong visit to El Dorado.

“(I’m) very impressed by the whole story behind what is happening here in Union County, not just this water project,” Westerman said during a luncheon with Sparta Aquifer stakeholders. “You’ve really got some great things going on here. And it’s because you all work together and you’ve got good leadership here.”

Westerman had many stops planned during the his trip to Union County on Tuesday. His day began at 10 a.m. at Great Lakes Solutions.

Westerman, along with Arkansas Senator Bobby Pierce and Union County Judge Mike Loftin, visited with patient’s families, toured the hospice house, visited with staff and were shown what hospice really is.

During lunch, Westerman visited with the Union County Water Conservation Board and the Sparta Aquifer stakeholders.

Each stakeholder in attendance had an opportunity to introduce themselves and discuss the work they have done for the aquifer and how they have benefited from its resurgence.

“We are so very pleased that Congressman Westerman took time to meet and listen to over 45 Sparta Aquifer Recovery Stakeholders today, some of whom have been working on Sparta recovery more than 20 years,” said Sherrel Johnson, grants manager with the UCWCB. “And it’s clear from his remarks after stakeholders introduced themselves to him, that he heard the group’s top priority — protecting the abundant supply of water behind Thatcher Dam on the Ouachita River.”

Overall, the stakeholders are grateful for their legislators’ diligence in saving the Sparta Aquifer for future generations, Johnson said.

Westerman ended his trip to El Dorado by visiting with the Medical Center of South Arkansas at 2 p.m. and the South Arkansas Arts Center at 3:30 p.m.

“He appreciates the hospitality of El Dorado and Union County,” said Ryan Saylor, communication director for Westerman. “He always enjoys his visits to area and looks forward to coming back.”