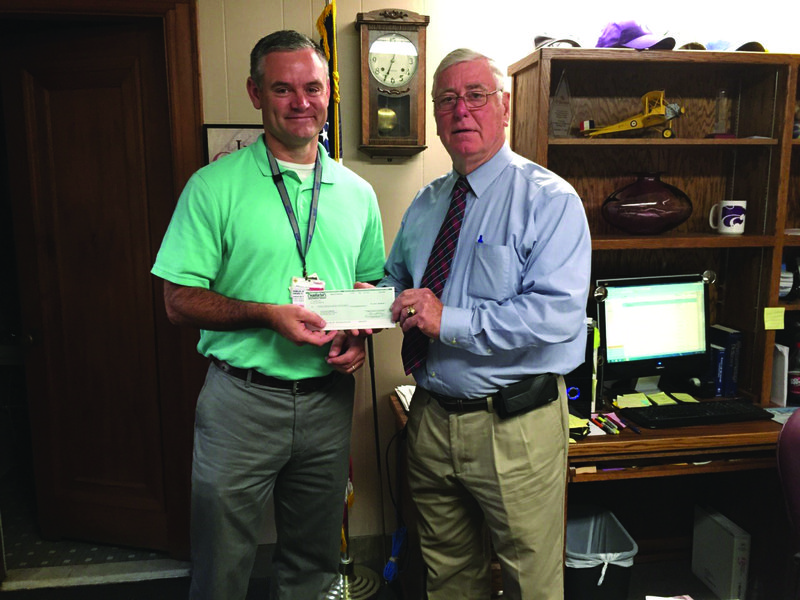 EL DORADO — A local industry has offered a sizable donation to assist with a master plan to improve and expand the El Dorado-Union County Recreation Complex.

Clean Harbors recently gifted $60,000 to the city of El Dorado and Union County to be used for the purchase of new playground equipment and to improve safety standards for the playground at the complex on Champagnolle Road.

Roblee said he was speaking with Stacy Scroggins, a member of the complex board of directors, about the progress of the master plan at the complex.

The two-phase, $1.7 million plan was drafted two years ago by CADM Architecture, Inc.

Phase one includes the completion of two existing fields, the construction of two additional fields, the relocation of the south playground, and parking expansion and upgrades.

A new baseball field and more parking improvements comprise the second phase of the plan.

Since the master plan was rolled out in 2014, the complex board has worked to raise money to implement it.

In late 2015, the Arkansas Department of Parks and Tourism awarded a $50,400 matching grant to install lights and electricity on the two newest fields on the south end of the complex.

To complement the grant award, the city of El Dorado later approved a maximum amount of $185,000 from its one-cent economic development tax.

And Robert Edmonds, director of public works, handled the bids for the lighting/electricity project.

Fast forward to the conversation between Roblee and Scroggins.

As the pair discussed the various components of the complex master plan, Scroggins informed Roblee about intentions to move the south playground closer to the Dumas pavilion and the need to upgrade the playground equipment to meet current safety standards and comply with the Americans with Disabilities Act.

“He just kind of jokingly said, ‘Hey, that would be a good project for Clean Harbors to take on,’” Roblee said.

Roblee pounced on the opportunity to help out with the project and to continue efforts by Clean Harbors to be a good corporate partner in helping to improve the quality of life for citizens of El Dorado and Union County.

While Scroggins acknowledged that he was hoping that Clean Harbors would be on board in assisting with the project, he did not expect $60,000 worth of help.

“I was thinking significantly less than what they did, but they wanted to do it and do it right,” Scroggins said.

Scroggins and complex board member Keith Smith, a purchasing manager at Clean Harbors, said that plans are to maximize the monetary gift by using it as leverage to apply for another state grant.

Scroggins said he was not yet sure if the complex board will able to use the money to tap into the upcoming grant cycle.

When the time comes, Scroggins said he thinks the group stands a good chance of receiving another grant.

He referred to comments made by a representative from the ADPT who visited the complex when the board of directors unsuccessfully applied for a grant two years ago.

Scroggins said the state representative pointed out that then the existing playground area was not up to current safety standards, and it was not accessible to those with disabilities.

“He said the committee that awards those grants looks favorably on projects where you’re taking steps to make things more accessible,” Scroggins said. “So I think this is all going to have a more positive impact on the grant process.”

Moving the playground closer to the Dumas Pavilion will not only help to make the area more secure for children and parents, it will also clear up space for additional parking at the complex, Scroggins said.

He said the details for the project have not yet been nailed down.

“We still have to work on the design, what type of equipment to buy … We’re going to look at playground that will serve kids, probably from the age of 2 to 12, but we don’t know yet,” Scroggins said.

Smith said the new playground will serve people in the community, as well as out-of-town visitors.

“You can go out there anytime, and there are always kids in the park playing, and when people come in from out of town, they may have some kids who are not part of the sports activities, so they want something for their other kids to do while they’re here,” Smith said.

“That complex has the potential to be a great economic engine for the community,” he continued.

Hash has been beating a similar drum about the economic possibilities for the complex.

To help with the playground project, the city has pledged to take care of any in-kind services that would help meet the match for a grant.

“It’ll help save money with the installation. The city will do any site preparation that is needed,” Hash said.

City officials also plan to meet with the Union County Quorum Court to discuss the future of how each entity will pay its share of expenses for the facility.

The city and county contribute pro rata to the annual expenses of operating the complex, and quorum court members have expressed a desire to place a cap on the county’s annual contribution.

However the complex is operated in the future, Roblee said Clean Harbors is looking to be involved.

“There’s a lot of great things going on in the community, and we just want to be a part of it, especially something that’s for the kids,” Roblee said.